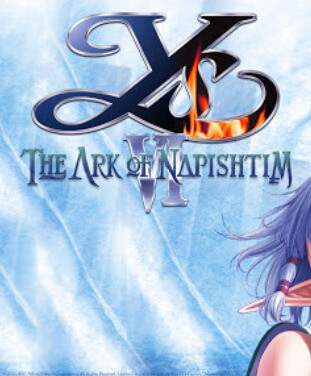 Ys VI: The Ark of Napishtim is an action role-playing video game developed by Nihon Falcom, and the sixth installment in the Ys video game series. It was first released in 2003 for Microsoft Windows. Not counting the remakes of Ys I & II, it was the first new Ys game released by Falcom in eight years. The name Napishtim is a reference to the character Utnapishtim from the Epic of Gilgamesh.

The game was ported to the PlayStation 2 in 2005 and to the PlayStation Portable in 2006 by Konami for worldwide release. It was the first English release of the series since Ys III: Wanderers from Ys. In 2015, an English localization of the Windows version was released by Xseed Games.

The story begins after Adol's ship is attacked by a fleet of Romun ships. Forced to sail into an unknown area, they encounter a large storm. Adol is swept off the vessel while trying to rescue a fellow sailor and washed ashore by the vortex that surrounds the Canaan Islands. He is found, unconscious, by the nieces of the chieftain of the nearby Rehda village, Olha and Isha, who are the daughters of his brother that died when battling with fellow Redha against the Wandering Calamity. The girls take him to their village and lay him to rest in their Uncle Ord's house. Adol hears them talking about him and wakes up briefly, afterwards going back to sleep because of his exhaustion. His adventure then begins.

The initial release of the game was the "Limited Edition". After this sold out, Falcom released a standard edition of the game with some new features. Two new difficulties and a Time Attack mini-game where the player fights through all the game's bosses were added. However, there was never a patch or upgrade released to initial buyers, so players wanting these new features had to buy the game again. Years later, Falcom would similarly add features to Ys Origin; this time, however, initial buyers were offered an upgrade disc for the cost of shipping. The "PC Vista version" is the same as the Standard Edition, with support for Windows Vista.

The PlayStation 2 and PSP versions received "mixed or average reviews", while the PC version later received "generally favorable reviews", all according to video game review aggregator Metacritic. In Japan, Famitsu gave the PS2 version a score of one six, one seven, one six, and one five, for a total of 24 out of 40.

(0) Comments on "Ys VI: The Ark of Napishtim Full Version"