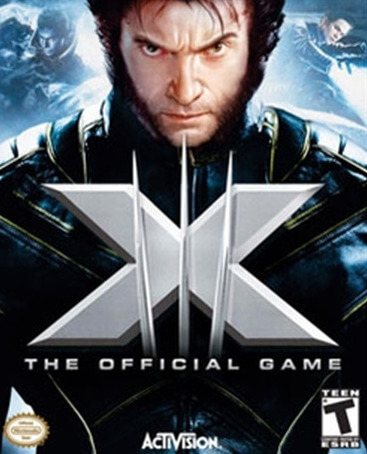 X-Men: The Official Game, along with most other games published by Activision that had used the Marvel licence, was de-listed and removed from all digital storefronts on January 1, 2014.

Players control the actions of several X-Men-related characters, most notably Wolverine, Nightcrawler and Iceman, as they uncover a plot to eradicate mutants. Sometimes, another X-Man will help the player's character battle. The Nintendo DS game features Magneto as a playable character, while the Game Boy Advance version features Colossus as a playable character. Many agree that Wolverine is the only useful character in the Game Boy Advance game, which allows players to cycle through characters at will, as he is the only one who can recover from damage.

During a session in the Xavier institute's Danger Room, Wolverine battles his rival, Sabretooth, and ultimately ends up losing the session, though he had been saved by the timely arrival of Iceman, who was there so that Cyclops could train him, but is too crippled with grief to do so (This is in reference to Jean Grey's Apparent death in X2: X-Men United). After Wolverine trains Iceman in the Danger Room, Professor X warns Wolverine against trying the Danger Room on "Danger Level 7" again, before asking the X-Men to return to Alkali Lake to retrieve irreplaceable parts to Cerebro. Nightcrawler infiltrates the remnants of William Stryker's base with his teleportation ability, since the weapons systems were somehow operational. Once inside, the X-Men discover a group of agents called HYDRA looting the base. Nightcrawler and Colossus go to find the Cerebro parts while Wolverine and Storm investigate HYDRA's presence. Wolverine and Storm discover that Stryker had been building giant robots called Sentinels as another plan to eradicate mutantkind.

Storm is abducted by Lady Deathstrike and Wolverine pursues her, eventually rescuing Storm. Nightcrawler is plagued by visions of Jason Stryker, who reminds Kurt he left him to die. Nightcrawler retrieves the Cerebro parts, battling a Sentinel in the process. A massive Sentinel- the Master Mold- is activated and rises from Alkali Lake. The X-Men and Lady Deathstrike escape; Wolverine attaches himself to Deathstrike's helicopter to follow her while the other X-Men return to the institute.

Iceman stops Pyro from triggering a meltdown at a nuclear power plant while Storm and Nightcrawler stop Multiple Man from blowing up a bridge. (this storyline is somewhat picked up in X-Men: The Last Stand, when Magneto and his new Brotherhood free Multiple Man from the Prison Convoy). Meanwhile, Wolverine follows Deathstrike and her HYDRA agents to Tokyo. Wolverine learns that Deathstrike and HYDRA are working for the Silver Samurai. After battling though legions of HYDRA forces and "killing" Deathstrike again, Wolverine confronts Silver Samurai. Samurai reveals that HYDRA helped Stryker build the Sentinels, not realizing he planned to turn them against mutants. Silver Samurai himself is a mutant, and the Master Mold's activation was a mistake. After defeating Silver Samurai, Wolverine learns that HYDRA has a device in Hong Kong that can stop the Master Mold, where the Master Mold is currently heading. Wolverine informs Professor Xavier, who contacts Magneto- fearing the X-Men cannot stop the Sentinels alone. Magneto and Sabretooth travel to Hong Kong to help the X-Men. Xavier also reveals that Jason Stryker is still alive; his psyche now fractured into two halves: a good half who has been appearing to Nightcrawler and an evil half that is controlling the Master Mold. He states that another of his students had a similar problem (referring to Jean Grey/Phoenix)

The X-Jet is shot down by Sentinels upon its arrival in Hong Kong. Iceman battles Sentinels and recovers HYDRA's device. Magneto arrives and uses the device to incapacitate the Master Mold, which crashes to the ground, but his helmet is knocked off of his head and Magneto is subdued by Jason's telepathic powers.

Nightcrawler disables the Master Mold's control center, guided by Jason's good half, who helps point the way through the maze of the Mold's body. Nightcrawler disables the Master Mold's neural net, changed by Jason to look like a demonic realm. Meanwhile, Iceman destroys the core of the Master Mold and Wolverine- in another of Jason's hallucinations- fights several feral clones of himself, emerging victorious. Nightcrawler attempts to save Jason as the Master Mold begins to collapse, but Sabretooth abducts Jason and attempts to make his escape. Wolverine tracks Sabretooth's scent and confronts him while Kurt escapes with Jason. The two have a vicious battle, ending with Logan throwing Sabretooth from a great height to be impaled below. Jason dies, thanking Nightcrawler for saving him. Magneto leaves, vowing that his next encounter with the X-Men will be as an enemy.