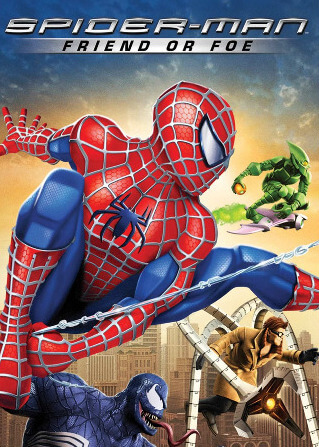 Spider-Man: Friend or Foe is a 2007 action-adventure beat 'em up video game based on Sam Raimi's Spider-Man trilogy. It was released for Microsoft Windows, Nintendo DS, PlayStation 2, Wii, Xbox 360 and PlayStation Portable in October 2007. The game allows the player to take control of Spider-Man or one of his sidekicks, which include other superheroes from the larger Marvel Universe, as well numerous supervillains from his rogues' gallery, as they all join forces to stop a symbiote invasion threatening the entire Earth. Both Spider-Man and his villains from the films - Green Goblin, Doctor Octopus, Sandman, Venom and New Goblin - have their designs based on their appearances in the Raimi Spider-Man films.

According to the company report, Spider-Man: Friend or Foe is a unique take on the media franchise. Based on the films Spider-Man, Spider-Man 2, and Spider-Man 3, this action game reinterprets big-screen moments and battles with a humorous twist. Players team up with famous heroes from the Marvel Universe to combat villains in epic boss battles, whom they then convert into sidekicks to aid them for the rest of their journey. The game includes a co-op multiplayer mode, which allows two players to play as Spider-Man and one of his sidekicks, heroes and villains alike, as they travel to different locations around the globe to battle symbiotes controlled by a mysterious villain and try to put a stop to the invasion; these locations include Tokyo, the fictional Tangaroa Island, Egypt, Transylvania and Nepal.

Spider-Man: Friend or Foe, along with most other games published by Activision that had used the Marvel licence, was de-listed and removed from all digital storefronts on January 1, 2014.

The game begins with a cutscene of Spider-Man battling his enemies from the films: Green Goblin, Doctor Octopus, Sandman, and Venom. With the help of New Goblin, Spider-Man manages to defeat them, but all six characters suddenly find themselves attacked by a large number of symbiotes. Before they get the chance to fight them, all the villains and New Goblin disappear, while Spider-Man is rescued by S.H.I.E.L.D. and brought aboard their Helicarrier, where he meets Nick Fury, the director of S.H.I.E.L.D.. Fury explains to Spider-Man that the meteor which brought the Venom symbiote to Earth has broken up in the Earth's atmosphere and five more pieces have landed in different locations across the globe. Fury then sends Spider-Man to retrieve these shards, as a mysterious villain has already obtained the shards and used them to create a holographic/symbiote combination of foot soldiers named P.H.A.N.T.O.M.s (Perpetual Holographic Avatar Nano-Tech Offensive Monsters), which are the same enemies that attacked Spider-Man and the other villains earlier.

Spider-Man is sent to various locations around the globe and successfully recovers the meteor shards, while also battling numerous P.H.A.N.T.O.M. soldiers dispatched by the mysterious mastermind villain to guard the shards. Along the way, he recruits numerous sidekicks to aid him in his quest, both heroes who are also trying to stop the invasion, and villains who have been placed under mind control by the mastermind villain and agree to join forces with Spider-Man in getting revenge on the villain, after Spider-Man battles and releases them from the mind control. In Tokyo, Spider-Man recruits Black Cat and battles Doctor Octopus and Green Goblin, freeing them from the mind control; on Tangaroa Island, he recruits Iron Fist and battles Scorpion and Rhino; in Cairo, he recruits the Lizard (who is not portrayed as a villain) and battles Sandman; and in Transylvania, he recruits Blade and battles Venom, who finally gives him a clue on who the mastermind villain is, referring to him as "bubbleman"; Prowler and Silver Sable are also available as sidekicks at the start of the game (although Silver Sable appears only in the Microsoft Windows version), while New Goblin becomes playable only after the completion of the game.

The last meteor shard is located in Nepal, where Spider-Man finally confronts the mastermind behind the P.H.A.N.T.O.M.s near his headquarters and discovers him to be none other than Mysterio, who plans to take over the world with his army and has used every shard to make it stronger. Mysterio then escapes with two shards, leaving behind two P.H.A.N.T.O.M.s to deal with Spider-Man, but he is able to use a shard to temporarily don his symbiote Black Suit and defeat them. With the increased powers grandted by the symbiote, Spider-Man fights through the remaining P.H.A.N.T.O.M.s and makes his way to Mysterio's base, where he engages the villain in a final battle. After Spider-Man defeats Mysterio, who is imprisoned for his crimes (offscreen), the P.H.A.N.T.O.M.s invasion is stopped for good and Spider-Man returns with the final meteor shards to the S.H.I.E.L.D. Helicarrier, where he has the black suit removed before it would start influencing his behavior and hands over all the shards to Fury. As Fury congratulates Spider-Man for his work and he returns home, Fury begins to analyze the shards and decides to name the study "Project Carnage" (although the character himself is not featured in the game, except in the PSP version; Madame Web is also mentioned in the game, when the computer tells Nick Fury that she has arrived on the hellicarier for their meeting at 4:00).