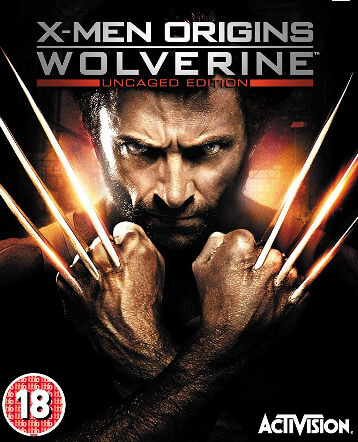 X-Men Origins: Wolverine is a hack and slash action-adventure game loosely based on the film of the same name. The game release coincided with the release of the film on May 1, 2009 for the PlayStation 3, Xbox 360, Windows, Wii, PlayStation 2, Nintendo DS, and PlayStation Portable. The game was developed primarily by Raven Software through the use of Unreal Engine technology.

X-Men Origins, along with most other games published by Activision that had used the Marvel licence, was de-listed and removed from all digital storefronts on January 1, 2014.

X-Men Origins takes influences from games such as God of War and Devil May Cry with a third person perspective. The Uncaged Edition also features a large amount of blood and gore. Enemies can be dismembered in several ways in addition to the graphic display of Wolverine's healing factor.

Combat relies on three options - light attacks, heavy attacks, and grabs. Another form of attack is the lunge, which allows Wolverine to quickly close the distance to an enemy. Wolverine can also use the environment to his advantage, such as by impaling foes on spikes. During combat, Wolverine's rage meter builds up, and when full allows him to use more devastating attacks, like the claw spin and a berserker mode, which increases Wolverine's claw strength until his Rage Meter empties. Experience (XP) is collected from defeating enemies, destroying elements and accumulating collectibles. The XP is used to level up, and each new level results in gaining skill points, which are used to purchase upgrades.

The PlayStation 2 and Wii versions are less graphic, with less language and slightly different combat. Feral senses are still obtained, which can detect doors, traps, enemies and sentinel observers, and lunges must be performed at closer distances.

The story is a combination of the Wolverine backstory explored in the film and an original plot created by Raven Software, which was influenced by major events in the X-Men comic series.

In the prologue, set in a bleak urban environment, Wolverine dismembers a group of soldiers sent to kill him. His thoughts drift to a forgotten past.

The game begins in Angola, Africa, chronicling the mission of Team X, led by Col. Stryker and his soldiers: James Howlett/Logan/Wolverine, Logan's brother Victor Creed/Sabretooth, Wade Wilson, John Wraith, and Nord, to locate a village that holds the secret to a valuable mineral deposit (implied to be adamantium). When Raven, their CIA liaison, objects to Stryker harming innocent civilians, Stryker orders her terminated and Wraith seemingly kills her. Team X locates the village but the villagers refuse to cooperate and Stryker threatens their lives. Logan turns on his teammates but he is subdued and knocked out before he can prevent the massacre of the villagers.

Three years later, Team X has mostly disbanded. Logan has settled in Canada with his girlfriend, Kayla Silverfox, when Creed surprises Logan at a bar and engages him in battle. Creed emerges victorious, breaks Logan's bone claws and knocks him unconscious. Logan awakens to find Kayla dead. Stryker arrives, telling Logan that Creed is killing his former comrades in revenge for Stryker firing him. He offers Logan a chance at revenge, via a procedure to bond the indestructible metal adamantium to his skeleton. Logan accepts, but when the procedure ends, he overhears Stryker order him to be terminated. He breaks out of the Alkali Lake facility in a rage, killing many of Stryker's men, including Nord, and vowing to kill Stryker and Creed.

Searching for Wraith, Logan travels to Project: Wideawake, a secret government facility producing mutant hunting Sentinel robots. Also searching for Wraith is Raven, revealed to be a mutant shapeshifter and Wraith's girlfriend after he faked her death. Raven leads Logan through the facility, where he encounters the Sentinels' mutant-hating inventor, Bolivar Trask. After cutting off Trask's hand to access Wraith's prison with his handprint, Logan rescues Wraith and destroys the large prototype Sentinel.

Wraith leads Logan to Fred Dukes, a former team member, who tells Logan of "The Island", a prison for mutants Creed captures on Stryker's behalf, and the location of Remy Lebeau, the island's sole mutant escapee. Remy flees when Logan questions him, thinking he is one of Stryker's agents, while Sabretooth surprises and kills Wraith. After battling Logan, Remy is convinced he is not with Stryker and takes him to the Stryker's island base.

Logan confronts Stryker and discovers Kayla is not only alive but a mutant who seduced Logan with her persuasion ability. Her "death" was an elaborate ruse to trick Logan into volunteering for Weapon X to acquire his DNA. Stryker's true plan is to complete the transformation of Wade into Weapon XI: grafting onto him the powers of various mutants (including Wraith and Logan) to create the ultimate mutant-killing supersoldier. Devastated by the truth, Logan accepts Stryker's offer to erase his memory, but changes his mind after Creed takes Kayla hostage. Logan bests Creed this time but Kayla convinces him not to kill Creed. While Kayla leaves to rescue her sister whom Stryker kidnapped to force her cooperation, Weapon XI is sent to kill Logan. Despite Weapon XI's capabilities, he dies by Logan's hand in the ensuing battle. Creed recovers and amicably parts ways with Logan but intends to remind his brother that they are both killers at heart.

Logan finds Kayla wounded and near death; Stryker takes the opportunity to shoot him in the head with an adamantium bullet, erasing his memories of the preceding events. Kayla persuades Stryker to walk "until his feet bleed", says a tearful goodbye to the unconscious Logan, and drowns herself in a lake. Logan heals from the gunshot but awakens aimless and alone.

The epilogue takes place in the same time period as the prologue: Trask has taken Logan hostage and replaced his severed hand with a lifelike robotic prosthesis. Logan breaks free of his chains and Trask flees. As an army of Sentinels ravages a ruined city in the distance, Logan quips "This world may be broken, but I've got the tools to fix it".