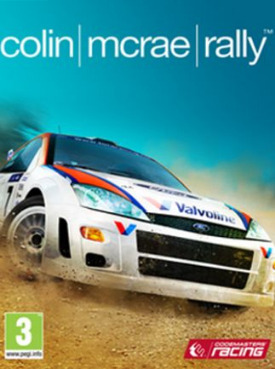 Colin McRae Rally is a racing video game developed and published by Codemasters for PlayStation, Microsoft Windows and Game Boy Color. It is the first game in the Colin McRae Rally series. It features 8 official cars (and their drivers) and rallies from the 1998 World Rally Championship season, in addition to 4 extra cars.

Seven official rallies (New Zealand, Acropolis (Greece), Australia, Monte Carlo, Sweden, Corsica, and the United Kingdom), and one unofficial rally (Indonesia) from the WRC were included in the game. Rally Indonesia was originally part of the 1998 WRC season calendar, but the rally was cancelled due to civil unrest. Although the rallies themselves are named the same as the real events, all of the stages are fictional.

When the game was re-released on the PlayStation "Value Series" budget label in 2000, Rally Monte Carlo was renamed as Rally Austria. On the loading screen for each rally, 2000 replaced the year 1998.

Although there is no internet-based multiplayer, the game does feature LAN-based multiplayer, allowing up to 8 drivers, on the same network, to compete at once, in addition to a 2-player split-screen mode. Sales soared, and the sequel Colin McRae Rally 2.0 was released on 14 December 2000.

Codemasters have cited the arcade game Sega Rally as a strong influence on Colin McRae Rally. Other influences included the PC game Screamer Rally and the Nintendo 64 game Wave Race 64. The company initially had some reservations on the viability of a realistic rally simulator, as similar games of the period such as V-Rally are only loosely based on the sport, essentially being head-to-head racing games in a rally-esque setting (similar to rallycross). They eventually saw the potential after some early play testing with impromptu competitions within the team through an early prototype build of the game, prompting the team to move into full development.

Besides providing technical input on the game's handling, Colin McRae and his co-driver Nicky Grist voiced themselves in the game, with McRae himself serving as the Rally School instructor for the game's tutorial mode.

The game also included an easter egg in the form of an alien abduction scene where the player's car is beamed upwards into a ship on certain special stages upon activating a cheat code, parodying the alleged abduction of Barney and Betty Hill by extraterrestrials in 1961.