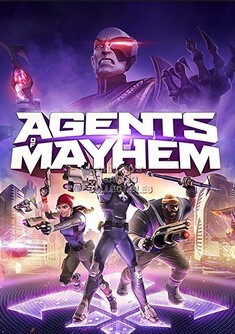 Agents of Mayhem is an open world action-adventure video game developed by Volition and published by Deep Silver. The game was released in August 2017 for Microsoft Windows, PlayStation 4, and Xbox One. The game's themes are based on Saturday-morning cartoons and superhero films. It is set in the same fictional universe as Volition's Saints Row series, and includes several plot and character crossovers.

Each agent has their own unique play-style and abilities. For instance, Hardtack uses shotgun as his primary weapon, while Hollywood utilizes his assault rifle. As players deal damage to enemies with their weapons, players accumulate points that will fill up a bar. When the bar is filled, players can utilize the agents' Mayhem abilities, which are superpower moves that greatly aid player in combat. Different agents have different mayhem abilities. For example, Fortune can use her drone, GLORY to stun enemies, while Hollywood can trigger massive explosions around him. Players can switch between the three agents they have selected freely, and experiment with different combinations of agents to see which trio of characters suit their playstyle the most. Movement in the game is fast. The agents can triple-jump around the city or use cars to traverse the game's world.

In addition to main campaign missions, there will also be unlock missions, which unlock new agents for players to control, and personal missions, which delves into the back-story of these agents. Different agents will have different personality, and their responses to in-game events vary. As the player progresses in the game, the agents will gain experience points, cash, skills, new gadgets, and mods that enhance their combat efficiency. There are also cosmetic customization options for the agents and the weapons featured in the game.

Agents of Mayhem takes place in a futuristic version of Seoul, South Korea, billed as "the city of tomorrow."

The game is part of a shared universe alongside Volition's Saints Row and Red Faction series, taking place after the "recreate Earth" ending of the Saints Row IV stand-alone expansion, Gat out of Hell. The game's plot revolves around an organization known as M.A.Y.H.E.M. (Multinational Agency Hunting Evil Masterminds), founded by Persephone Brimstone (a character first seen in Gat out of Hell) and funded by the Ultor Corporation (one of the main antagonists of Saints Row 2 and the Red Faction series, later merging with the Saints in Saints Row: The Third). Bearing the Saints' purple fleur-de-lis logo, M.A.Y.H.E.M's goal is to stop supervillain organization L.E.G.I.O.N. (the League of Evil Gentlemen Intent on Obliterating Nations) from destroying the world's nations.

Development of the game began shortly after the release of Saints Row IV. The game began its development cycle as some concept art and character descriptions, and after receiving positive comments from outsiders who have listened to their pitch, one of whom described it as "G.I. Joe versus Cobra Megafight 2020", the game soon entered full production. Unlike previous Saints Row games, which have only one player-controlled protagonist, Agents of Mayhem introduces multiple playable characters. This was done because Volition reflected on some of their previous fan events, where fans opted to cosplay as the supporting characters rather than the central character. They considered it an evidence to show that fans of the franchise would be interested in a character-focused game. Another reason is that the company, inspired by League of Legends and Dota 2, wanted players to form a strong connection with the characters. Volition also thought that the game, being a single-player title, has a great advantage, since most games with a diverse cast of characters are multiplayer-focused. The game's tone and style was inspired by 1980s action cartoons such as G.I. Joe, He-Man, and television series like The A-Team.

In 2014, after receiving $200,000 in incentives from the city of Champaign, Illinois, Volition began hiring upwards of 100 employees to begin work on a new project. Little was known about this game until a trademark for Agents of Mayhem filed by Koch Media (Deep Silver's parent company) was discovered in May 2016, along with résumés linking the project to Volition. Further speculation arose from a 2013 Polygon interview with Volition's Scott Phillips, referring to Saints Row players as "agents of mayhem". The game was formally announced on June 6, 2016 with a cinematic announcement trailer released via IGN. Agents of Mayhem was released in North America on August 15, 2017 and in Europe on August 18, 2017.