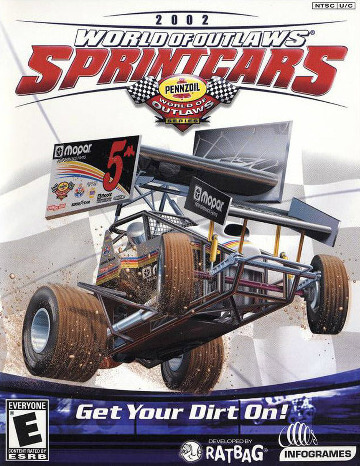 World of Outlaws: Sprint Cars 2002 is a sprint car racing video game for the PlayStation 2 and Microsoft Windows. GameStop's review of the game describes the "gameplay is solid and the physics are top-notch." The game had a limited sales run; it developed a large following and it was widely requested at video game stores.

The career mode starts with one car and little money the driver has to race at the available distance tracks (tracks they can afford to travel to) to unlock other tracks. While also entering as many races in the local, regional, World of Outlaws (WoO) support-class and the World of Outlaw races themselves. The sprint car handling becomes more difficult as the player advances to higher classes.

As money is accumulated, new items can be added to the car to upgrade its horsepower and handling. When enough money is accumulated another car with better handling and horsepower can be purchased. Players can choose to sell any car or hold on to several cars at one time. Players also have the option to repair damage that typically takes place on a race weekend. As little as $5 fixes to as high as several hundred dollar repairs. Depending upon the nature of the damage sustained from the race weekend.

Entering the higher end races (WoO Support, WoO) will require better cars to be able to compete, so winning at the local and regional level is very critical to overall success. Doing well in the lower series will help players earn sponsorship that can help them make the necessary upgrades.

The racing happens on dirt ovals - 12 real-world tracks and several simulated ovals. The gameplay is known for its unpredictability: artificial intelligence (AI) cars sometimes drive perfect laps and sometimes spin out after bumping into other sprint cars. The dirt surface can quickly change between laps with the addition of loose dirt, hard surface, and ruts. Another example of its realism is that the player receives a limited number of tearoffs to clean the loose dirt which accumulates on the player's helmet.

Each race event starts with an optional practice session before a qualifying session. The qualifying results are used to set the starting grid in one of two heat races: the top six finishers in the heat race determine the starting order for a trophy dash which sets the top twelve spots in the main event and the lower six finishers in the heat race are entered in a B dash which sets the final four spots in the main event.