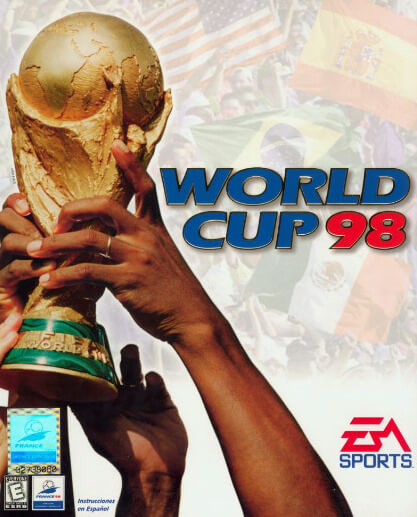 World Cup 98 is the first official FIFA World Cup game developed by EA Sports after obtaining the rights from FIFA in 1997. Unlike the previous World Cup games, which were in 2D and showed a bird's-eye view, World Cup 98 used a 3D engine, utilising DirectX for the PC version. Accurate national team kits (except for the goalkeepers who were issued a generic kit) were introduced complete with kit manufacturer logos and official merchandise. The game engine is based on that of FIFA: Road to World Cup 98, though it features some minor gameplay improvements to areas such as in-game strategy changing and player positioning. The playable teams in the friendly mode also included several nations that did not qualify for the finals. World Cup 98 was released for Microsoft Windows, PlayStation, Nintendo 64 and Game Boy.

The main feature of the game is the World Cup tournament itself, where the player may use either the actual groups used in the finals, or groups composed of a random selection of the 40 included teams. Each match takes place in a recreation of the venue it was played in the actual tournament. As in the real tournament, group games do not go to extra time or a penalty shootout but knockout matches do.

The game was released prior to the actual World Cup, therefore results between CPU teams are not based on results from the actual tournament. At the end of each match, a caption shows the man of the match award, and if applicable a clean sheet caption. At the end of the "World Cup" game mode, captions show the winner of the Golden Boot for most goals scored during the tournament and winner of the FIFA Fair Play Award, two awards which are given in the real World Cup.

It is also possible to play friendly matches between any of the teams that are included in the game. At the end of a drawn game the player can choose to finish the match as a draw, play extra time with the golden goal rule, or take part in a penalty shootout.

As in FIFA 98, national squads can be customised to reflect the actual tournament's players by including players from a reserves pool in the "customise" option.

The "World Cup Classics" mode allows the player to play fifteen classic FIFA World Cup matches. The 1982 match is unlocked by winning the "World Cup" mode, and by completing each unlocked game, the next one is unlocked in the order shown below. "World Cup Classics" mode features accurate period team kits (except for the goalies), hairstyles and names, and commentary for this mode only was provided by Kenneth Wolstenholme, the BBC's commentator during the 1966 and 1970 FIFA World Cup. For the 1950, 1954, and 1966 World Cup Final matches in this mode, the graphics are in black and white, as they were shown on television at the time. The 1930 and 1938 matches are shown using sepia tone graphics. In matches that took place prior to the introduction of substitutions, it is not possible to change a player during the match (however, this also applies to the 1970 final, which was when substitutions became the rule). Other historical inaccuracies include cards being awarded to players in matches prior to 1970 and the use of brown leather balls for matches from 1970 onwards, in lieu of balls like the Adidas Telstar (for 1970 and 1974) and the Adidas Tango España (for the 1982 final).

The game features every team that qualified for the 1998 FIFA World Cup, as well as eight others who did not. The United Kingdom version of the game features commentary from John Motson and Chris Waddle, with matches introduced by Des Lynam and Gary Lineker.

In 1996, EA Sports obtained exclusive rights to use the 1998 World Cup in video games published anywhere except Japan.

The game was met with positive reception. GameRankings gave it a score of 85% for the Nintendo 64 version, 80% for the PlayStation version, and 76% for the PC version.

Next Generation reviewed the PlayStation version of the game, rating it four stars out of five, and stated that "Released to coincide with the recent World Cup frenzy, Electronic Arts' World Cup 98 is technically a winner. The game delivers fast reactions to controller commands, realistic player movement, clean graphics, an excellent soundtrack, and adrenaline-pumping excitement."

The PlayStation version was a bestseller in the UK. At the 1999 Milia festival in Cannes, it took home a "Gold" prize for revenues above €48 million in the European Union during the previous year. PC Guide's July 1998 issue named World Cup 98 as the winner of a group test involving other PC football games around at the same time, ahead of competitors such as Actua Soccer 2, Three Lions and Sensible Soccer '98. The magazine described the game as "Simply the best football game in the world."