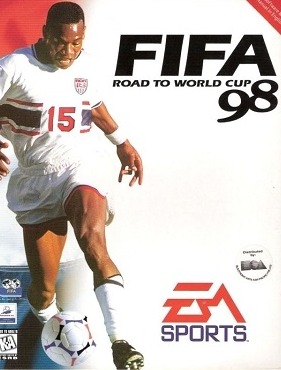 FIFA: Road to World Cup 98 (commonly abbreviated to FIFA 98) is an association football video game developed by EA Canada and published by Electronic Arts. It was the fifth game in the FIFA series and the second to be in 3D on the 32-bit machines. A number of different players were featured on the cover, including David Beckham in the UK, Roy Lassiter in the United States, Mexico, and Brazil, David Ginola on the French cover, Raúl on the Spanish cover, Paolo Maldini on the Italian and Andreas Möller on the German cover. FIFA 98 was the last FIFA game released for the Mega Drive.

The game includes an official soundtrack and had a refined graphics engine, team and player customisation options, 16 stadiums, improved artificial intelligence and the popular Road to World Cup mode, with all 172 FIFA-registered national teams. No subsequent edition of the FIFA series had attempted to replicate FIFA 98's inclusion of every FIFA national team, up until 2010 FIFA World Cup South Africa which included all 199 FIFA nations that took part in qualifying. With the new graphical improvements, players were able to have individual faces.

FIFA 98 even features many accurate team rosters, including national reserves for national call-up when playing in the round-robin qualification modes. In addition, eleven leagues were featured, containing 189 clubs. The game also featured a popular five-a-side indoor mode and was the first FIFA game to contain an in-game player/team editor.

For the first time in a FIFA game, the offside rule is properly implemented. In previous games, when a player was in an offside position doing anything except running, that player was penalised for offside even when the ball was passed backwards. The 32-bit and 64-bitcitation needed versions of FIFA 98 correct this so that the game would only award a free kick for offside if the ball was passed roughly to where the player in the offside position was.

The theme music for the game was Blur's "Song 2". Four songs from The Crystal Method were also included in the game – "More", "Now Is the Time", "Keep Hope Alive" and "Busy Child" – as well as a song by Electric Skychurch entitled "Hugga Bear". Des Lynam was retained for the game introduction and John Motson and Andy Gray remained as match commentators.

There were 16 stadiums in the game, representing 16 countries from all six FIFA confederations.

The game was a bestseller in the UK for 2 months. At the 1999 Milia festival in Cannes, it took home a "Gold" prize for revenues above €37 million in the European Union during the previous year. Play magazine in issue 29 awarded the PlayStation version of the game 88%.

In 2017, Luke Plunkett of Kotaku wrote an essay arguing that FIFA 98 should be considered as the best sports video game of all time, focusing on its then-unprecedented depth and breadth of content, which Plunkett contended is the main differentiating factor between titles within the highly incremental sports video gaming industry. Examples cited were its inclusion of all FIFA national teams of the time, customization options for rosters and kits, multiple game modes, and groundbreaking soundtrack including licensed rather than original music.

Next Generation reviewed the Nintendo 64 version of the game, rating it four stars out of five, and stated that "The game still doesn't have the fluidity of ISS 64, but the real players and variety of options make FIFA RTTWC 64 a game that soccer fans all over the world should enjoy."