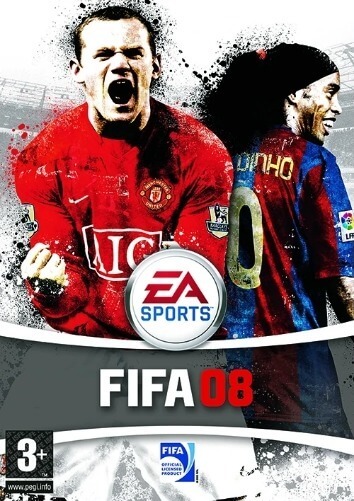 
FIFA 08 (named FIFA Soccer 08 in North America) is the 2007 installment of EA Sports' series of football video games. Developed by EA Canada, it is published by Electronic Arts worldwide under the EA Sports label. It was released on all popular gaming formats in September 2007 in Europe, Australia, and Asia, and in October 2007 in North America. The PlayStation 3 and Xbox 360 versions of the game feature an improved game engine with superior graphics and different commentators and are dubbed "next-generation" by EA. On all other platforms—including the PC—the game utilizes an older engine. The Nintendo DS version features fewer teams, stadiums, game modes and kits due to the limitations of the machine's storage medium.

The tagline for the game is "Can You FIFA 08?." The theme song is "Sketches (20 Something Life)" by La Rocca, from the album The Truth.

New features that were not in FIFA 07 include "Be a Pro Mode", where the player plays as only one player (the player can be changed) throughout the entire match. However, this mode is not available for goalkeepers.

New features for the PlayStation 3 and Xbox 360 include cooperative online play and a change of controls, which features the right stick as a way of selecting which player is to be on defense. However, this control setting can be changed back to the FIFA 07 configuration as well as other preset control configurations. In addition, the online mode has a new addition with interactive leagues, where players choose a league, a team, and play against real-life opponents. While not an entirely new feature, FIFA 08 includes new trick moves that can be used by using the right analog stick, which were, for the most part, absent in FIFA 07. In general, the speed of game also has decreased in FIFA 08.

In the PS2 version of the game, two new features were added. The first being goalkeeper AI, which meant when in a one-on-one situation with a forward and goalkeeper, one could push the right analog stick and have complete control of the goalkeeper. The second of these was when taking a free kick you were able to push the R3 (right stick) to lock the position of the ball, while you used the stick to determine exactly where you wanted the free kick to go. These were two features that have not been used in any FIFA games since, although many users and fans have expressed their feelings to see both or one make a welcome return.

The Manager Mode on 08 has few enhancements from its predecessor, however, some of the new features include the chance to schedule training on certain dates, via the manager's calendar, and the option to play up to four pre-season friendlies.

FIFA 08 includes 621 licensed teams, 43 national teams, with 30 leagues and more than 15,000 licensed players. Several teams from other leagues also appear in a "Rest of World" category. Of the 621 teams that comprise the game, 29 appear unlicensed, 13 of them being national teams.citation needed

FIFA 08 has 44 teams in its international division. The most notable exclusion is Japan (who made it into the round of 16 in the 2002 World Cup, but whose licensing rights currently belong to Konami). The following international teams are playable in the current generation consoles. But not all the teams are fully licensed e.g. Netherlands and Spain.

The game was well-received, garnering an average of 81.5 on both next-generation consoles (Xbox 360 and PS3) because of its refreshing new game mechanics, which broke out from the series' criticised past record of not making much of an effort to innovate, instead adding what were often described by critics as "gimmicks".citation needed

In 2008, FIFA 08 was nominated for BAFTA Children's Kids Vote Award.