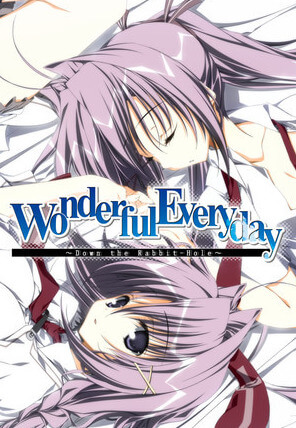 Wonderful Everyday is a visual novel video game developed by KeroQ. It was released for Microsoft Windows in 2010 in Japan by KeroQ, and in 2017 internationally by Frontwing. It is KeroQ's fourth game after Tsui no Sora, Nijūei and Moekan; it shares many characters and plot elements with Tsui no Sora.

The game requires minimal interaction from the player, as the duration of the game is spent on reading the text that appears onscreen; this text represents either dialogue between the various characters, narration, or the inner thoughts of the protagonist. A number of choices exist, some of which determine the plot branch on which a story continues. Viewing all the branches is necessary to proceed to the next story. The game generally follows adventure game conventions, with the text appearing at the bottom of the screen, but segments exist where it is overlaid on the entire screen.

Subarashiki Hibi contains six stories, the titles of which are taken from chapters in Alice's Adventures in Wonderland and Through the Looking Glass. Most of the stories take place in the fictional Suginomiya neighborhood of Tokyo and recount the month of July 2012 from different perspectives.

"The story of the sky and the world." The protagonist of this story is Yuki Minakami, who one day encounters a girl named Zakuro Takashima as she is throwing stuffed animals off a rooftop. Zakuro soon begins living in Yuki's house with her, as do her childhood friends, Kagami Wakatsuki and Tsukasa Wakatsuki. Together, they enjoy a peaceful school life and help Zakuro search the stars for a local legend - the 'girl of the sky.' The branches allow Yuki to either enter a yuri relationship with one of the Wakatsuki sisters and live happily ever after with them, or pursue the mystery of Zakuro and continue onward to Down the Rabbit-Hole II.

Down the Rabbit-Hole II

Though considered part of the Down the Rabbit-Hole story by the game, according to the scriptwriters, this branch is the true beginning of Subarashiki Hibi's plot. The protagonist of this story is Yuki Minakami, who one day encounters a girl named Zakuro Takashima whom she does not remember meeting before, but who seems to know her well. The next day, she learns that Zakuro has killed herself. A boy in Yuki's class named Takuji Mamiya makes a speech claiming that Zakuro's death was an omen of the coming apocalypse, to take place in one week - on July 20th. As Yuki investigates the strange circumstances of Zakuro's suicide and Takuji Mamiya's prophecy, events grow ever stranger and people continue to die.

It's my Own Invention

"The story of the beginning and the end." The protagonist of this story is Takuji Mamiya, who one day encounters a girl named Zakuro Takashima. It reveals the events that led him to make his prophecy and the cult that develops around him, retelling the chronology of Down the Rabbit-Hole II from his perspective, as well as introducing his conflict with Tomosane Yūki. The branch instead focuses on his relationship with Kimika Tachibana, the girl who professes herself his servant.

"The story of the literature girl and the chemistry girl." The protagonist of this story is Zakuro Takashima, who one day encounters a boy named Takuji Mamiya. Occurring prior to Down the Rabbit-Hole II, the story focuses on her relationship with Takuji and the events that led to her suicide, while the branch is a "happy ending" in which tragedy is averted when she mends her ties with her estranged friend, Kimika Tachibana - and when she meets a strange boy who looks just like Takuji, but will not tell her his name...

"The story of the savior and the hero." The protagonist of this story is Tomosane Yūki, who one day encounters a girl named Yuki Minakami. It reveals the truth of many of the bizarre events in Down the Rabbit-Hole II and It's my Own Invention, while introducing further mysteries related to Yuki, Takuji and Tomosane's past. Hasaki Mamiya first becomes a major character in this story.

"The story of the brother and the sister." The protagonist of this story is Hasaki Mamiya, who one day encounters her brother, Takuji Mamiya. Shorter than the other stories, it offers a third perspective- perhaps the first reliable one- on the events of the final week, as well as providing the first concrete details of the Mamiya family's past, foreshadowed in Jabberwocky and fully revealed in Jabberwocky II.

"The story of the sunflowers and the hill." The first part of this story takes place seven years in the past in the isolated village of Sawaimura, where the Mamiya and Minakami families once lived. From the recollection of their past, the protagonists finally find the strength to change their fate and arrive at one of three endings: Hill of Sunflowers, Wonderful Everyday or End Sky II.

The Wonderful End of the World
hit
upd
new

Tomoyo After: It's a Wonderful Life
hit
upd
new