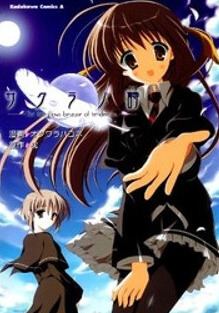 Sakura no Uta: Sakura no Mori no Ue o Mau (サクラノ詩－櫻の森の上を舞う－), originally titled Sakura no Uta (サクラノ詩): The tear flows because of tenderness., is a Japanese adult visual novel developed by Makura and released on October 23, 2015 for Windows after being delayed since 2004. Sakura no Uta is Makura's third game along with the title H2O: Footprints in the Sand and Root After and Another. A trial version of the game was released on September 26, 2008. A manga adaptation illustrated by Hakone Odawara was serialized in Kadokawa Shoten's manga magazine Comp Ace between March 26, 2005 and March 26, 2006; the chapters were later collected into a single tankōbon volume released on June 7, 2006.

The gameplay requires almost no interaction from the player as nearly the entire duration of the game is spent on simply reading the text that will appear on the screen; this text represents either dialogue between the various characters, or the inner thoughts of the protagonist. There is a single choice that the player gets to make which determines which girl the protagonist chooses. There are six main plot lines that the player will have the chance to experience, one for each of the heroines in the story. In order to view the six plot lines to their entirety, the player will have to replay the game multiple times and choose a different choice at the single decision point in order to further the plot in an alternate direction. A true ending will be available after the completion of the stories of all the heroines. In contrast to visual novel adventure games where the text appears near the bottom of the screen leaving the rest of the window open for viewing the game's visual content, the text in Sakura no Uta appears over the entire screen in a shaded, but otherwise transparent box. However, there is an option to hide the text in order to see the background without obstruction.

Naoya is the main protagonist of the story. He moved into the Natsume household after his father died. He cooks for the Natsume family since neither Ai, Kei, nor Shizuku can cook decent meals.

Rin is Naoya's childhood friend, and is quite clumsy. She moved to the countryside, but then moved back, transferring to Naoya's class. She refers to Naoya as "Kusanagi-kun", but used to call him "Nao-kun" before she moved back.

Shizuku is Ai's and Kei's younger sister; she rarely smiles. She is currently working as a model.

Yūmi is an underclassman to Naoya. She is a neat freak.

Ai is Kei's and Shizuku's older sister, and Naoya's homeroom teacher. She is popular among the students, and is very short despite being twenty-four-years-old. After Naoya's father died, she invited him to live with her family.

Makoto is the president of the school's art club; she is a very bossy person.

Rina is an underclassman to Naoya. After Rin moved away, Naoya began to play with her. She looks up to Naoya as her big brother.