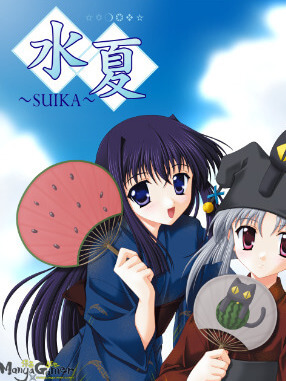 Suika (水夏) is a Japanese adult visual novel developed by Circus and was first released on July 27, 2001 for Windows as a CD-ROM, followed by a DVD-ROM release on August 31, 2001. It was followed by two all-ages consumer ports for the PlayStation, retitled as Water Summer, and the Dreamcast on July 18, 2002, which was subsequently followed by an all-ages version for Windows, released on July 25, 2003. An expanded version, entitled Suika A.S+ (水夏A.S+), was released in Japan on September 24, 2004 with the adult content found in the original version, followed by a European release on April 25, 2009, and was again ported to the PlayStation 2, entitled Suika A.S+ Eternal Name (水夏A.S+ Eternal Name), released on August 30, 2007 with the adult content removed. The gameplay in Suika follows a linear plot line, which offers pre-determined scenarios and courses of interaction, and focuses on the appeal of the main female characters.

Suika has made several transitions to other media. A light novel was published by Paradigm in November 2001 and a set of four drama CDs were produced between August 2002 and January 2003. A four-episode adult original video animation created by Moon Rock was released between February 25, 2003 and June 25, 2003 as three DVDs containing one episode each, followed by a DVD box-set released on April 25, 2004 containing an extra episode, and was subsequently licensed for sale in North America under the title Wet Summer Days by Kitty Media.

The Suika visual novel is divided into four chapters which contain different stories and characters, though all take place in the same rural town known as Tokiwa Village. In a short prologue upon starting a new game, the player assumes the role of Hiroshi Inaba as he arrives back in town for his annual visit of friends and family. It is here that the two heroines for the two upcoming chapters are seen through his eyes. In the first chapter, the player assumes the role of Akira Kazama and centers around his interaction with the first chapter's sole main heroine Itsuki Minase (voiced by Minami Nagasaki).

Suika's gameplay requires little interaction from the player as most of the game's duration is spent reading the text that appears on the game screen, which represents either dialogue between the various characters or the inner thoughts of the protagonist. After progressing through the text, the player will come to a "decision point" where he or she must choose from multiple options. The time between these decision points varies. Gameplay pauses at these points and depending on which choice the player makes, the plot will progress in a specific direction. There are five main plot lines the player experiences—one for each heroine. The player must replay the game multiple times and make different choices during decision points to view all five plot lines. One of the goals of the original version's gameplay is for the player to enable the viewing of hentai scenes depicting the given protagonist and one of the heroines having sex.

Suika is the fourth project developed by the visual novel studio Circus, and the second by their Northern subdivision. The producer for Suika was Tororo, president of Circus, who was also one of the two music composers, the other being Kometto Nekono. The planning for Suika was headed by Mikage, and was one of the two scenario writers along with Ichirō Go. Art direction and character design was split between Naru Nanao and Takanon Ikuta. Programming for the game was provided by Takanori. Tororo, Mikage, and Naru Nanao went on to create titles such as Da Capo, with the latter two later collaborating to help develop Minori's Ef: A Fairy Tale of the Two.