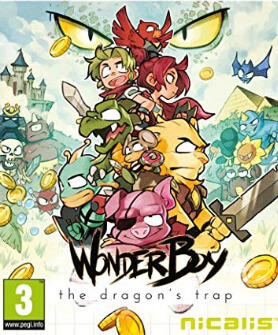 Wonder Boy: The Dragon's Trap is a platform action-adventure game developed by Lizardcube and published by Dotemu. The game is a remake of the 1989 game Wonder Boy III: The Dragon's Trap, which was originally developed by Westone Bit Entertainment and published by Sega for the Master System as part of the Wonder Boy series. The game was released on Nintendo Switch, PlayStation 4, and Xbox One in April 2017, later releasing for Microsoft Windows in June 2017, macOS and Linux in July 2017, and iOS and Android in May 2019.

Wonder Boy: The Dragon's Trap is a remake of the original Wonder Boy III: The Dragon's Trap, with gameplay reverse engineered from the original Master System code, featuring brand new hand-drawn graphics and musical rearrangements. Set immediately after the events of Wonder Boy in Monster Land, players control an adventurer who, upon defeating the Mecha Dragon, has become afflicted with a curse turning them into a Lizard-Man. The player must journey across the world and defeat all the other dragons in the land in order to return to their human form. As in the original game, players explore various lands, defeating enemies to earn items, such as arrows and fireballs, and money which can be used to purchase new weapons and armor. Over the course of the game, the player gains new animal forms, each with new abilities allowing for additional exploration. These include Lizard-Man, who can spit fire, Mouse-Man, who can cling onto checkerboard-patterned blocks, Piranha-Man, who can swim underwater, Lion-Man, who can perform a vertical slash attack, and Hawk-Man, who can fly through the air.

The game retains the gameplay and level design of the original game, albeit with some enhancements such as instant weapon-toggling and removing the need to acquire charm stones to purchase new equipment. The game also supports passwords from the original game. New features added to the remake include additional difficulty settings, the option to play as a female character named Wonder Girl, hidden bonus areas, and the ability to independently toggle the graphics and audio between modern and retro styles with additional options for visual filters and FM audio. This marks the first time FM audio had been available officially in a Western release of the game.

The idea of creating a fan remake of Wonder Boy III: The Dragon's Trap was originally conceived by Omar Cornut as early as 1998. Development eventually began in late 2013, and the remake was first announced in June 2016.

The remake was originally developed by programmer Cornut and artist Ben Fiquet, who previously worked together on Soul Bubbles, as a fan remake developed by reverse engineering the original Master System game's code. Lizardcube worked on the game in collaboration with original game designer Ryuichi Nishizawa. Fiquet produced all the art and animation for the game single-handedly. Despite requests from fans to include characters from Monica's Gang, mimicking how the original game was released in Brazil under the same license, Lizardcube have stated that it wouldn't be possible due to the licenses required, although an unofficial fan-created mod for the PC version was released in July 2017. The same also applies to using sprites from Hudson Soft's TurboGrafx-16 port of the game, Dragon's Curse, as the rights to that version are currently held by Konami.

Wonder Boy: The Dragon's Trap has received mostly positive reviews, with the Switch version currently holding a score of 79/100 on Metacritic. IGN said that "while (the original game)'s design definitely shows its age, (the remake) still has a few wonders in store for us thanks to a solid foundation, aesthetic upgrades, and some much-appreciated updates to the original programming." GameSpot praised its visual enhancements and called it "one of the best retro remakes yet". Eurogamer also praised the game, saying that it sets the bar for updating classics. Pop Culture Bandit awarded the game 4 out of 5 stars, calling the title "a delightful love letter to one of the most enjoyable games of the 8-bit era."

The Switch version of the game has outsold all other versions combined.