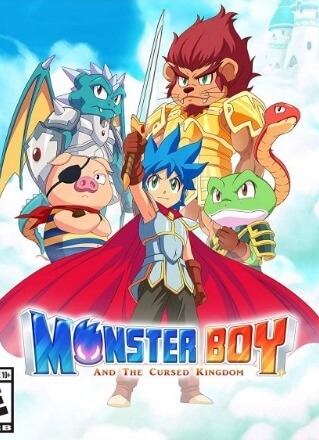 Monster Boy and the Cursed Kingdom is a platform game developed by Game Atelier and published by FDG Entertainment. The game is a followup to Sega's Wonder Boy series, and was released for the Nintendo Switch, PlayStation 4, and Xbox One in December 2018, and for Windows in July 2019. It was generally well received by critics.

A boy named Jin discovers his Uncle Nabu using magic to spread chaos across the kingdom, turning everyone, including his brother Zeke, into animals. While trying to stop Nabu, Jin gets turned into a pig. Learning from the king's court magician, Mysticat, about a way to return everyone to normal, Jin goes on a quest to recover five animal orbs from across the kingdom. Upon doing so, however, Mysticat takes the orbs from Jin and uses them to open the gateway to the Dark Realm for his master Lord Xaros, who had been manipulating Nabu to do his bidding. Venturing into the Dark Realm, Jin confronts Xaros and, with the help of his friends and the spirits of past Wonder Boys, manages to defeat him, restoring the kingdom to normal.

Monster Boy and the Cursed Kingdom is a side-scrolling adventure game in which players control Jin as he battles enemies and solves puzzles to progress through the story. Similar to the 1989 Sega Master System game, Wonder Boy III: The Dragon's Trap, Jin gains six different animal forms throughout the course of the game, which can be switched between at will once obtained. These include a pig who can sniff out hidden contraptions and clues, a snake who can climb walls and enter small spaces, a frog who can use his tongue to swing on hoops and carry items, a lion who can charge through blocks, a dragon who can fly and spit fire projectiles, and Jin's human form who can dash through obstacles. In addition to these forms, players can obtain weapons and armor from shops, many of which offer unique abilities which can be upgraded by finding gemstones.

Monster Boy was originally created by Paris-based studio Game Atelier as a planned Kickstarter project titled Flying Hamster II: Knight of the Golden Seed, a sequel to the company's 2010 Flying Hamster. The Kickstarter was cancelled and a partnership with FDG Entertainment was announced. After a year of silence, Game Atelier revealed that they had partnered with LAT Corp to officially incorporate the title into the Wonder Boy series. Since the trademark was held separately from the rest of the IP, a new title was chosen, combining Monster World and Wonder Boy: Monster Boy and the Wizard of Booze. The game was later retitled to Monster Boy and the Cursed Kingdom due to criticisms towards the previous subtitle's reference to alcohol.

The game was developed in collaboration with Wonder Boy series creator Ryuichi Nishizawa, who also supported DotEmu and Lizardcube's remake of Wonder Boy III: The Dragon's Trap. The game's soundtrack was composed by Yuzo Koshiro, Motoi Sakuraba, Michiru Yamane, Keiki Kobayashi, and Takeshi Yanagawa, with the main theme performed by Haruka Shimotsuki. In addition to the original score, some rearranged music from past entries in the series was included, composed by Shinichi Sakamoto. The soundtrack took two years to create, with over 40 pieces being included in the game.

Originally set to use motion-based sprite animation for the characters, the developers announced in October 2017 that they would be switching to hand-drawn animated sprites. In February 2018, FDG Entertainment announced they partnered with Sega to release the Nintendo Switch and PlayStation 4 versions of the game as physical retail copies in North America, and launch them alongside the digital release on all platforms. It was originally scheduled to release on November 6, 2018 worldwide, however, due to "unforeseen difficulties" regarding the production of the physical copies, FDG Entertainment rescheduled the game's release for December 4, 2018. However, only console versions were released on that date due to the developers' distribution contract to finish those versions on time, with the Windows version released on July 25, 2019.

The game sold 50,000 copies within a week of its console release. In January 2019, FDG Entertainment announced that the Switch version sold eight times more copies than the PlayStation 4 and Xbox One versions combined.

(0) Comments on "Monster Boy and the Cursed Kingdom Full Version"