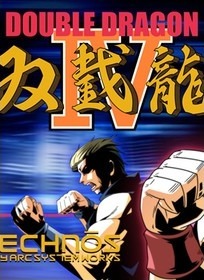 In addition to a story mode, the game includes a two-player duel mode and a tower battle mode. Enemies and bosses as well as hidden characters can be unlocked for Story and Duel modes through Tower Mode.

Unlike earlier games in the series, this sequel is developed by Arc System Works, who bought the series rights in 2015 after acquiring original publishers Technōs Japan. Several series developers continued to the project, including the original director, character designer, composer, and programmer with production led by Arc System Works designer Takaomi Kaneko. The game was announced in late December 2016 via a gameplay trailer. GameSpot had expected a graphical update, similar to Double Dragon Neon, but the new sequel's gameplay and graphics are more akin to the ports made for the Nintendo Entertainment System, with several character sprites taken directly from those titles, rather than the arcade original.

Double Dragon IV received mixed to negative reviews. According to video game review aggregator Metacritic, the PS4 has a score of 49, while the PC version has a score of 50. Destructoid gave it a 6/10, stating "Arc System Work's staunch dedication to the retro aesthetic for Double Dragon IV is admirable, but still falls short of the mark even when juxtaposed to several of the series' own entries." IGN awarded it a score of 3.5/10, saying "Double Dragon 4 is a retro brawler that leans too heavily on elements that haven't aged at all gracefully. Metro said "The ‘80s nostalgia is laid on so thick you could almost choke from it. If you want to pretend there was a long lost, and not very good, NES sequel to Double Dragon then this does the job perfectly"