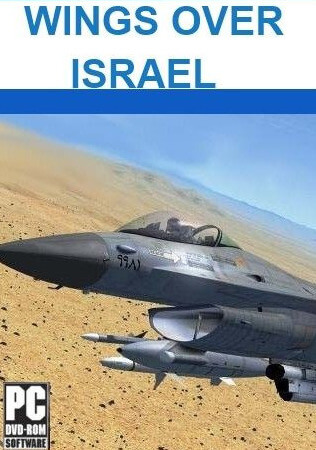 The game includes a wide variety of real jets and weapons from the era, which can be employed in various mission types such as Combat Air Patrol, Interception, Close Air Support, Escort, Defense Suppression, and Reconnaissance. The game is based on the Strike Fighters engine and was developed by Third Wire Productions.

Wings Over Israel was released in 2008 and was part of the Strike Fighters series of "lite" flight simulators developed by Third Wire Productions. The term "lite" was applied because they are designed to be relatively easy to learn and play compared to other more "hardcore" flight simulators.

The game was set in Middle East from 1967 to 1982, player flying the IDF/AF jet fighters in three historical campaigns. The developer took and improved on its existing Strike Fighters engine and thus the game was another step forward in terms of quality and game play.

Despite the "lite" tag, a fair amount of realism has been built in; 60s-style bombsights are simulated for the pre 1970's aircraft rather than modern computer-aided aiming reticules. Dive bombing and level bombing techniques have to be worked out by the game player if they are to have success at completing missions. Aircraft that come into service after 1970 have advanced Head-Up-Displays that allow the player to aim bombs with more accuracy than manual dive bombing techniques. The A and B versions of the AGM-65 Maverick, allowing much easier ground target destruction for the late 1970s aircraft.

Israeli air-to-air missiles in the game consist of versions of the AIM-9 Sidewinder, AIM-7 Sparrow, Matra 530, Shafrir-2, and Python-3. Early missiles are simulated to be as unreliable as the real missiles were, so regardless of having a "good lock on the target" there is a good chance the missile will still miss. Later model missiles from such as the AIM-9L version of the Sidewinder are much improved and more likely to score a hit. Dogfights are usually close-in affairs regardless of the time period, however as the missiles get better over time, longer range kills can be achieved.

Flying over Egyptian or Syrian territories, the player's aircraft will be met with a high level of radar-guided Surface to Air Missiles (SAM), and a variety of lethal Anti-Aircraft Artillery (AAA). The main SAMs are the soviet SA-2 and SA-6, of which early and later versions are included in the game increasing lethality accordingly.

The player can select a historical campaign from either Six-day War (1967), October War (1973), or Lebanon War (1982); each being from a different time era with different aircraft and weapons forcing the player to employ different tactics in each.

Single Missions are also available, which can generate random missions.