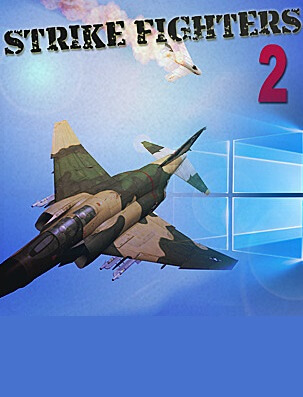 Strike Fighters 2 is a PC game (Combat / Flight Simulator) that primarily centers on a fictitious conflict in the Middle East between the Kingdom of Dhimar and the Empire of Paran from the late 1950s to the early 1970s. Although the countries and conflict may not be real, the aircraft and weapons used are completely accurate. The conflict is modeled as a typical Cold War era 'proxy' war between the United States and USSR where Dhimar gets help from the US and Paran uses imported Soviet equipment and expertise.

Third Wire Productions developed the game based on the original Strike Fighters: Project 1 but had to be vastly rewritten to work with the Vista platform. In doing so the latest graphical, Artificial Intelligence, and features were written into the simulation.

The storyline of Strike Fighters is set during a fictional conflict between the Kingdom of Dhimar and the Empire of Paran. The story begins in 1919, when geologists discover oil in the Valley of Kerman, a place at the Dhimari-Parani border. When drilling operations begin in the oil fields, Shah Mushani of Paran sends his troops across the border, beginning a long conflict between the nations.

In September 1933, Shah Mushani decides to put a halt to the conflict, following numerous attempts to capture the Mazadran oil fields. While Dhimar becomes a wealthy and economically powerful country, Paran has become poor. In February 1957, Halani Khomar, a Soviet-backed revolutionary leader, stages a bloody coup against the Mushani regime. Once in power, Khomar begins building up the Parani military forces, buying the newest fighter aircraft and tanks from the Soviet Union.

King Husani Karmar al'Galbhi of Dhimar, fearing a new war, decides to approach the US for military assistance. Tensions between the two countries culminate in two years of terrorist attacks in Dhimari border cities. In June 1959, the Dhimari ports become subject to a Parani naval blockade, stopping all shipping from and to Dhimar. Prince Fa'ad al'Galbhi, commander of the Dhimari Air Force, starts an emergency buildup of air power by creating several Special Operations Wings, manned by foreign mercenary pilots willing to fight. In July, the US dispatches US Naval and Air Force squadrons to assist their ally.