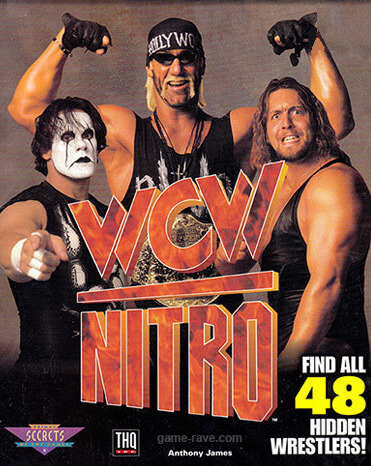 WCW Nitro is a professional wrestling video game based on the professional wrestling TV show WCW Monday Nitro. Released by THQ for the PlayStation game console in 1998, the game featured a large roster of playable WCW wrestlers as well as full motion video clips of the TV show. The game was followed by WCW/nWo Thunder, which was based on Nitro's Thursday night counterpart. Ports for Nintendo 64 and Microsoft Windows were released later in 1998 and 1999 with the updated roster featured in Thunder.

Moves are performed by inputting various button combinations. Each wrestler shares a repertoire of wrestling moves and possesses several of their own signature moves.

Modes of play include singles and tag team matches for one or two players, as well as a one-player tournament mode, where the player must defeat a number of wrestlers to be crowned champion.

There are initially 16 playable characters (each featuring a video introduction), with 48 others that can be unlocked, either by playing through the tournament mode with various wrestlers or by using a cheat code. Some of these secret characters are WCW wrestlers or personalities, while others are fictional characters or THQ staff.

Next Generation reviewed the PlayStation version of the game, rating it three stars out of five, and stated that "Ultimately, WCW Nitro, not unlike actual wrestling, delivers fun, if not terribly sophisticated entertainment."

WCW Nitro received mixed reviews upon its release. It was praised for its dead-on WCW atmosphere, innovative control scheme, and large roster. Some reviewers, though, criticized its tedious controls and sub-par graphics. The N64 port, however, drew the most criticism; the majority of negativity stemmed from the game's lack of new features and enhancements, overly fast pace, and poor controls. Released four months after the original PlayStation version, the N64 version also gained criticism for being simply a rehash of the PS1 version, albeit with Thunder's roster.

Nevertheless, the initial WCW Nitro for PlayStation sold enough copies to merit a re-release under the Greatest Hits banner.