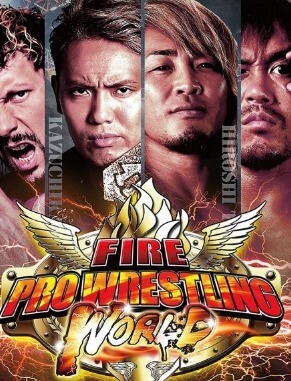 Fire Pro Wrestling World is a professional wrestling video game published by Spike Chunsoft. The game was released on Steam Early Access on July 11, 2017, with a full release for PC on December 18, 2017 and released for PlayStation 4 on August 28, 2018 in the United States. The game is part of the Fire Pro Wrestling series.

Fire Pro Wrestling World sees a return to the timing and strategy based gameplay the series has become famous for, which was dropped in the series' last game, Fire Pro Wrestling for the Xbox 360 in 2012, in favor of a button-mashing mini-game. Game modes will include the traditional death matches, including steel cages, barbed wire and landmines, MMA rules matches, and more. Fire Pro Wrestling World will be the first game in the series to incorporate online multiplayer, holding up to four players in a match. At Wrestle Kingdom Fan Fest 2018, Spike Chunsoft announced that New Japan Pro-Wrestling would be officially licensed and would come complete with a Story Mode, dubbed Fighting Road, and at least the IWGP Heavyweight Championship. They also featured a Demo match for the Fire Pro World Championship, won by Kushida. A Jr. Heavyweight Fighting Road story, as well as a Promoter mode, dubbed Fire Promoter, will be available later as DLC shortly after release.

Fire Pro Wrestling World received favourable reviews with a score of 79 out of 100 on Metacritic.