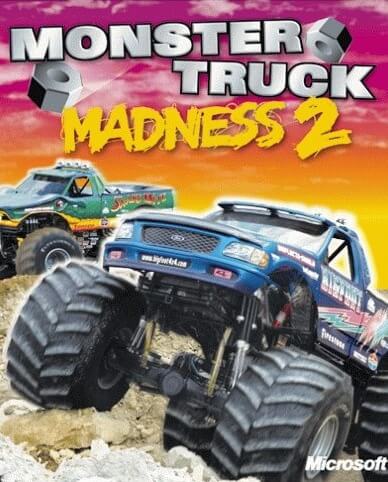 Monster Truck Madness 2 is a monster truck racing video game developed by Terminal Reality and published by Microsoft for the PC (Windows 95/NT) in 1998.

It's a sequel to Monster Truck Madness for the same platform, and one of the first racing games to feature an online multiplayer mode. Online play for it was available on the MSN Gaming Zone until early 2006.

The game was ported to the Nintendo 64 in 1999 by Edge of Reality. It was co-published with Rockstar Games and released as Monster Truck Madness 64.

The game is known for featuring the biggest names in monster truck racing like Bigfoot, Grave Digger and Carolina Crusher, as well as WrestleTrucks —monster trucks named after WCW talent.

This sequel offers improved graphics, an updated interface, new trucks and tracks and the addition of variable weather conditions when compared to its predecessor. However, the game engine is essentially the same, and most custom trucks and tracks are compatible with both games. The game contains assets from older TRI games, like Hellbender and CART Precision Racing.

The "Summit Rumble" king of the hill tracks could only be played if the player intended to compete online. Again, "Army" Armstrong provides commentary for the game. However, his race calls have been updated, and new ones have been added. Just like its predecessor, it contains an inaccessible truck, "Chuck's Car" (a Chevrolet Camaro). It was intended to be unlocked by typing in "CHUCK" in a race. The game still displays this message when typed: "Restart the game to drive Chuck's Car." However, if one restarts the game, it isn't there.

The game's file mounting systems gives the possibility to add (or remove) custom tracks and trucks to the game using different editors.

GameSpot said for the PC, "The designers wisely recognized that the subtlety of monster truck racing cried out for the added nuance that only a professional wrestling tie-in could bestow." GameSpot also rated the game 7.4 (good).

Next Generation reviewed the PC version of the game, rating it three stars out of five, and stated that "Overall, this new version is a definite improvement."

Doug Trueman reviewed the Nintendo 64 version of Monster Truck Madness 64 for Next Generation, rating it one star out of five, and stated that "If you want intense off-road gaming, play EA's Beetle Adventure Racing instead and run this title over with your car."