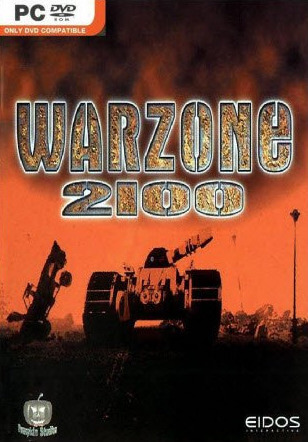 Warzone 2100 is an open-source real-time strategy and real-time tactics hybrid computer game, originally developed by Pumpkin Studios and published by Eidos Interactive. It was originally released in 1999 for Microsoft Windows and PlayStation, and is now also available for macOS, FreeBSD, AmigaOS , AROS, MorphOS, Linux, NetBSD and OpenBSD.

While Warzone 2100 was developed and released as a proprietary commercial video game, on December 6, 2004, the source code and most of its data was released under the GNU General Public License version 2; the rest of the data followed on June 10, 2008.

In the late 21st century, the world's civilizations are wiped out by a series of nuclear strikes, seemingly caused by a massive malfunction of the new NASDA (North American Strategic Defense Agency) strategic defense system. While most of the survivors form scavenger bands to survive, the player is a member of a group named "The Project", that is more organised and seeks to rebuild civilization using pre-war technology.

The game begins with The Project sending three teams (Alpha, Beta, and Gamma) to gather technology that would help with reconstruction; the player assumes command of Team Alpha in Arizona. While gathering said "artifacts", the Project fends off attacks from an organization called the New Paradigm, another major survivalist organisation, which is more advanced than the player's forces. Later however, it is discovered that a self-aware computer virus named 'Nexus' is actually controlling the New Paradigm.

After the player defeats the New Paradigm, he is assigned to Team Beta, which is based in Chicago and under attack by a faction called 'The Collective'. Again, the player starts out less advanced than 'The Collective' and it is discovered that Nexus is controlling this faction too. At the end of the campaign, Nexus launches nuclear missiles at Alpha and Beta bases, prompting the player to abandon the facility and move to the Gamma base.

Upon arriving at Gamma base, the player is immediately ambushed by the Gamma forces, which have already been taken over by Nexus. After the player survives the ambush and develops countermeasures to 'Nexus' infection, Nexus takes control of the remaining NASDA satellites and attempts to destroy the player. However, before he can succeed, the Project captures a NASDA missile site, and shoots down the orbiting laser weapons. It is learned that the scientist Dr. Reed, who was bankrupted by the US military, transformed himself into the Nexus virus and was responsible for the nuclear holocaust by infiltrating the 'NASDA' systems. At this point, the survivors of the Alpha and Beta bases arrive, and the three Project teams launch a full-scale assault on Nexus. The Project destroys Nexus and can begin rebuilding civilization.

The game is fully 3D, based on the iViS 3D graphics engine developed by Sam Kerbeck of Eidos Interactive The game world is mapped by a grid; vehicles tilt to meet hilly terrain, and projectiles can be realistically blocked by steep mountains or buildings. The camera is free-moving and can zoom in and out, rotate, and pan up or down while navigating the battlefield.

In the game, units of different factions are painted different colors. The New Paradigm, the Collective, and Nexus are the enemies of the Project in the campaign, and they can be seen attacking Project forces as well as Scavengers, survivors of the nuclear fallout.

Units can all be customized according to: chassis (which, for example, takes weight and power into account); drive system (such as wheels or tracks); and mounted object (such as a weapon, or one of various support tools). Units can earn experience. Earning experience cause units to level up from ranks such as Rookie to Trained and Professional.

There is an emphasis on artillery: although many direct- and close-combat weapons and anti-air weapons can be researched and deployed, artillery is a staple of assault on enemy bases and outposts. While the technology tree is clearly defined and consistent, it never appears in-game and, therefore, the player can be left guessing as to what technology is next in the tree. Technology can be acquired by gathering artifacts left behind by certain destroyed enemy structures or units. Researching is composed of largely small and incremental advancements over existing weapons, armor, and chassis types.

Some levels require you to achieve the objective within a time limit whilst some without these limits can be used to gather "power". In Away missions, the player must select a limited group of units to transport to a territory completely removed from the original base.

All of the terrain throughout the campaign is essentially composed of three areas, with different sectors for Away missions and other such levels; upon progression, previous maps simply expand and the player's original bases from past levels are maintained. Also, its resource system is quite different from mainstream RTS games; Oil Derricks are established over specific, scarce locations which constantly provide a slow, fixed rate of income. Combined with a mission time limit, this resource method makes it generally infeasible for players to utilize certain traditional RTS tactics such as "turtling" (fortifying one or more bases against enemy attack, while stockpiling resources with which to produce a massive army).

However, there are certain missions throughout the game that do not have a time limit, and in these missions it is possible to use more traditional RTS tactics to prepare for subsequent timed missions.