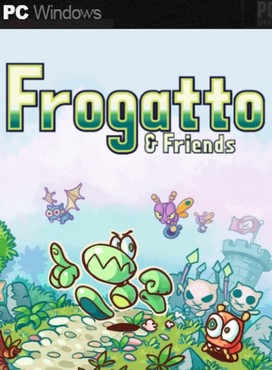 In Frogatto & Friends, the player helps the title character, Frogatto, save his friends from trouble.

The game was created by a team that includes the creator of The Battle for Wesnoth, and three of Wesnoth's department leads.

In contrast to their previous project, The Battle for Wesnoth, the Frogatto team did development as a small centralized team, with the intention of building a solid engine and a game to showcase that engine, before trying to build a community around the game; the intent being to speed up development by reducing bureaucracy, and to enable stronger creative freedom over the work.

The game's engine is programmed in C++ with cross-platform capability in mind. In the Anura game engine's GitHub license file, the source code is licensed under the zlib license and the included content as CC0. Both the source code and the game have been publicly available since r125 of their source repository, but they did not attempt to build a community around the game until after reaching 1.0. It is intended by the developers that the source code of the game be used to help make other open-source games. The engine is also multi-platform and runs on most systems where the game runs. This helps developers of smaller platforms (such as AmigaOS) by giving them technologies to create high quality, open-source, new modern games on (and for) their system (and reach users of other platforms as well).

The game released in July 2010. The game is available for purchase for a variety of computer operating systems (e.g. MacOS' app store), and in the iPhone App Store and BlackBerry App World. In 2013, version 1.3 was made available through the Humble Store.