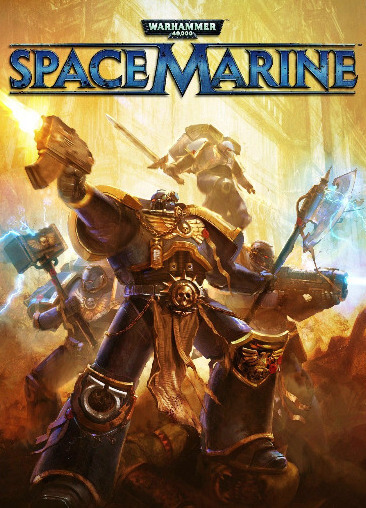 Warhammer 40,000: Space Marine is a third-person shooter hack-n-slash video game developed by Relic Entertainment and published by THQ. It was released for Microsoft Windows, PlayStation 3 and Xbox 360 on September 6, 2011, in North America and September 9, 2011, in Europe. The game takes place in Games Workshop's Warhammer 40,000 universe and features the Ultramarines chapter. Its gameplay focuses on a hybrid shooting and melee combat model.

In Space Marine, the player engages enemies with both melee and ranged from a third-person point of view. The player character, Titus, has regenerative abilities. When his health gets low, performing some actions can allow Titus to regain a portion of his health. Titus is accompanied by the characters Sidonus and Leandros for most of the missions, though some missions are performed alone. The game features a fury meter that, when filled up, allows the player to either slow time for aiming or perform powerful melee attacks.

The starting weapons include a combat knife and a pistol, though the player can acquire other weapons. The game also includes a new weapon not featured in the table-top game known as the Vengeance Launcher, which can shoot sticky grenades.

The game's main antagonists are the Orks and the Forces of Chaos. The Orks are an alien race of brutish warriors. The Forces of Chaos are an even greater threat, and can summon monsters that live in a parallel dimension known as The Warp. Portals conjured by the Traitor Legions allow daemons to enter the battlefield.

The game's story takes place in the Warhammer 40,000 universe. The events of the story take place on Forge World Graia, a planet devoted to producing military weapons for the Imperium of Man which has been invaded by alien Orks.

After the invasion of Forge World Graia by Orks, Imperial military commanders consider various methods to regain control of Graia, especially since the loss of Graia's industrial output has greatly affected local Imperial war-making capabilities. In the end, it is decided to deploy a group of Ultramarines to reinforce local Imperial forces.

Initially upon arrival, the squad provides assistance to the outnumbered and overrun Imperial Guard regiments fighting on the planet's surface, which after the loss in battle of all higher-ranking officers are now being led by the sole surviving junior officer, Second Lieutenant Miranda 'Mira' Nero; she informs Titus of the present situation and briefly accompanies the squad to their next engagement. Titus agrees to silence the captured planetary defense cannon, which has been preventing supply ships from reaching the beleaguered defenders. This done, Mira thanks the Space Marines and continues to help Titus however she can over the course of the game, amidst re-organizing the remaining Imperial Guard forces and attempting to hold the majority of the invading hordes at bay until the delayed reinforcement fleet arrives. The Space Marines then move on to continue with their own mission and, amidst securing the Titan Invictus (one of a class of giant, bipedal war machines that are produced primarily on Graia and the principal reason for the Ultramarines' deployment there), answer a distress call from the injured Imperial Inquisitor Drogan, from whom they learn of a weapon that can wipe out the Orks, but which needs a power source that is located in a reactor below the Manufactorum. Titus retrieves it and activates the Psychic Scourge, but the Orks are not killed. Instead, a Warp gate to the psychic realm of Chaos is opened, unleashing several daemons that massacre the surrounding Orks. Moments later, the Chaos Lord Nemeroth emerges from the portal. Using his Warp powers, he subdues the Space Marine squad as Inquisitor Drogan arrives via lift and approaches Nemeroth, revealing his allegiance to the Chaos Lord. It is then revealed that Drogan was killed at some point prior to meeting Titus and his corpse was possessed and used by Nemeroth as a sleeper agent. Titus gathers enough strength to grab the Power Source, which had been ejected from the Scourge, and Nemeroth is ambushed by Grimskull, the Ork Warboss in charge of their invasion of Graia, allowing the Space Marines to escape.

The Scourge opens a growing Warp portal around the Orbital Spire, allowing Chaos forces to pour in; seeing this, Titus forms a plan to destroy the portal and the Spire by using one of the Titans they had secured earlier (their original mission). The Titan Invictus is brought to full activation by the Power Source, and destroys the Spire. However, Sidonus is killed by Nemeroth, the Power Source is stolen and taken to the floating remains of the Spire.

The reinforcement fleet now having finally arrived, including a company of Blood Ravens Space Marines, the rest of Titus's company and large numbers of Imperial Guard, Titus leads them in an attack through the remaining Chaos forces to stop Nemeroth from performing a ritual to ascend to the status of a Daemon Prince using the power of the device. Nemeroth has partially ascended to Daemonhood when Titus finally faces him again; both are knocked off the spire in the struggle, and the Captain defeats him in single combat while falling towards the ground. He then breaks the experimental device in half with his hands. Titus survives the exposure to the raw Warp energy again, and is rescued by a Thunderhawk dropship before he can impact the ground.