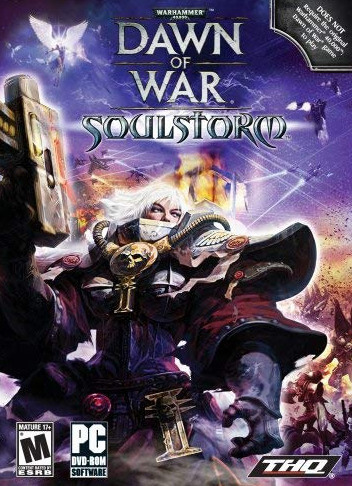 Warhammer 40,000: Dawn of War – Soulstorm is the third expansion to the real-time strategy video game Warhammer 40,000: Dawn of War, developed by Iron Lore Entertainment. Like its predecessors, Soulstorm is based on Games Workshop's tabletop wargame Warhammer 40,000, and introduces a multitude of new features to the Dawn of War series, including two new playable factions in the form of the Imperial Sisters of Battle and the Dark Eldar. It is a stand-alone game and does not need the original Dawn of War disc to run, but players must have the prior games installed and valid cd-keys in order to play as anything but the two new factions online.

Gameplay features real-time strategy interaction. Game operation is similar to previous Warhammer titles, except for the new aerial units that do not follow these rules, and new campaign gameplay features.

Each race is given a new aerial unit that does not obey the normal rule of engagement in the Dawn of War series. These units are mostly specialists in engaging and destroying enemy vehicles and/or infantry.

As with its predecessor Dark Crusade, Soulstorm features a "meta-campaign" featuring 31 territories spread over four planets and three moons.

One difference, however, is that unlike Dark Crusade, there are no persistent bases. Once the player conquers a province, the base structures the player has built up will not be present in future conflicts. This can be remedied by reinforcing provinces with buildings and units in between battles, or by establishing a forward base using the Sisters of Battle army ability. Each Stronghold has a unique ability, each race starts with that ability.

Another difference is that the strength of an attacking enemy army is no longer based on strength of province they're attacking from, but their army size.

Multiplayer remains the same as in previous titles, with players given the ability to either play via LAN or on the GameSpy network. A new 'medal' system has been added that provides rewards for certain player milestones (5-to-1 kill ratio, etc.), but there is no means of viewing the complete collection of medals a player has earned. It is assumed this problem will be addressed when an official patch is released along with other various bug fixes and corrections to the game, such as the current issue restricting certain masses of players from joining online multiplayer games.

The Kaurava conflict began after a sudden appearance of a Warp Storm near Kaurava IV. Previously, the system was held entirely by the Imperium of Mankind and defended by the Imperial Guard, except for two areas -- the Ork infested jungles of Karuva II and the underground of Karuva III, holding Necron tombs in hibernation. The warp storm leads to the awakening of the Necrons, and the arrival of Ork warboss Gorgutz, who absorbs the indigenous Orks with his own forces. Six other factions appear in the system. The Eldar under the leadership of Farseer Caerys arrive in response to the Necron awakening, their ancient enemy. The Imperial Guard comes under suspicion by the Imperium's Blood Ravens chapter of the Space Marines, and the Sisters of Battle, for suspected heresy. This forces a conflict between the three imperial factions. The Chaos warband of the Alpha Legion arrives using the warpstorm. The Tau arrive, intending to annex the system into the Tau Empire. Finally, the Dark Eldar, usually avoiding large-scale warfare, sees the chaos and confusion of the conflict as an opportunity to capture prisoners and souls.

Chaos: The reason for the Warp Storm is revealed in the Chaos ending to have begun with an ignorant Imperial Guardsman with latent psyker genes who was whispered to by the Chaos Gods, telling him to prepare a ritual. His actions unknowingly summoned the Alpha Legion to the Kaurava System, thus starting the conflict. The Alpha Legion succeeds in turning Karuva into a staging ground for attacks into the Imperium.

Imperial Guard: Vance Stubbs clears the Karuvan defenders of suspected heresy. The surviving Blood Ravens and Sisters of Battle are treated after their defeat. The entire system is recolonized, except for Karuva III, containing the Necrons. Karuva becomes a system of incredible value to the Imperium.

Blood Ravens: The Blood Ravens treat the Imperial Guard and Sisters with mercy. They establish Karuva as a fortress-system, allowing them to use it as a base and recruiting ground.

Eldar: The Eldar after conquering the system withdraw, but clandestinely remain. The few Imperial Guard survivors manage to rebuild with reinforcements, but the Eldar prevent Karuva III from being colonized, as to not provoke further Necron awakenings.

Tau: The Tau establish Karuva as a great system of importance in the Tau Empire.

Sisters of Battle: The opposing Imperial forces are executed by the Sisters. They clear the rest of the system and establish Karuva as a place of pilgrimage within the Imperium.

Dark Eldar: The Dark Eldar capture incredible amounts of prisoners before departing from the system.

Orks: Karuva is conquered and serves as a staging point for a WAAAAGH! under the command of Gorgutz.

The fate of the Kaurava System depends on the actions taken by the various factions fighting over it, but the only known details on the canonical ending initially came only from dialogue in the sequel, Warhammer 40,000: Dawn of War II. Scout Sergeant Cyrus states that the Kaurava campaign was a failure, and that the majority of the Blood Ravens led by Captain Indrick Boreale were wiped out, costing the chapter half of its manpower in a single campaign. As a result, the severely undermanned Blood Ravens cannot afford to lose their recruiting worlds in sub-sector Aurelia and must defend them at all costs. It is revealed in Dawn of War III that the Orks led by Gorgutz were the canonical victors and the ones responsible for Indrick Boreale's defeat, but Gorgutz became bored with the conquest and would later go to Cyprus Ultima to serve under Gitstompa after hearing of the planet Acheron while battling the Eldar on the Kaurava System. Though this contradicts the ork victory ending in the game as the ork faction victory epilogue stated that right after winning Gorgutz led his own "campaign of galactic conquest" that was "staged" from Kaurava with the forces he organized in Kaurava and equipped with the weapons made in "fields of orkish factories" his orks built for this "purpose" after conquering the system.