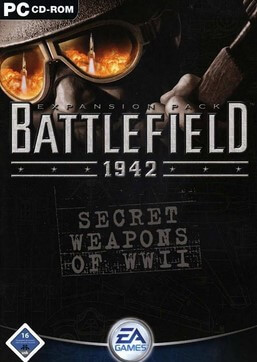 Secret Weapons of WWII brings many new features to the original game, such as new weapons, vehicles, battles, factions, and a new gameplay mode that focuses on fulfilling objectives more than destroying the enemy army. These new features help to bring variety to its predecessor's gameplay without overhauling the series. For example, while an Allied engineer may still maintain his original role as being able to repair vehicles, his long-ranged rifle has been replaced with a shotgun, which is effective at short distances.

As in Battlefield 1942, players play the role of a soldier in a two-sided battle and can choose which weapons and/or vehicles they want to use in accomplishing this task of victory on the battlefield. Usually, the team that works together more effectively wins by reducing the enemies tickets to zero in a classic "Conquest" mode. (A team loses tickets when its members are killed, but also when the other team holds a majority of the capture points on a map.) Even more so than in Battlefield 1942, the weapons in Secret Weapons of WWII are designed to be used in unison with other weapons in order to compensate for weaknesses and maximize strengths.

A gameplay mode introduced in Secret Weapons of WWII is an objective-based mode in which players focus on accomplishing specific objectives in order to win the battle. For example, on Essen, the German forces must prevent Allied forces from destroying key portions of a weapons factory. If the Allied forces successfully fulfill these objectives, the German tickets are drastically reduced, usually winning the game for the Allies.

The default Allied (US) Army and Axis (German) Army have received new weapons and vehicles in addition to the creation of two entirely new factions, the SAS (British Commandos) and the German Elite Troops (the Waffen-SS and the Fallschirmjager). The accompanying update package 1.41 introduces an additional three new factions, USMC, RAF, and Luftwaffe. Each faction has unique weapons to their faction that can only be obtained by playing as that faction or picking them off a fallen enemy soldier. They also have unique vehicles that are only available at their bases. Even with the creation of these new factions, all the maps in the expansion pack are Axis versus Allies, as is the custom in the Battlefield series.

Also of special note is the Jet Pack, which allows players to fly in the air while firing a weapon. In order to maintain gameplay balance, the Jet Pack is very susceptible to blowing up while under fire, instantly killing the player. As opposed to other weapons, the Jet Pack is not unique to one faction, and instead, it can be found at one or more locations throughout a particular map as an item that replaces the player's current equipment. However, there are only four maps which have the Jet Pack in them.

The expansion pack was officially announced at E3 2003; although, there was significant speculation preceding the announcement that Electronic Arts was making a second expansion pack to Battlefield 1942. Nearly six months later Battlefield 1942: Secret Weapons of WWII began to be sold at stores for thirty dollars, ten dollars more than the originally conceived twenty dollar price tag. This sometimes negatively affected reviews.