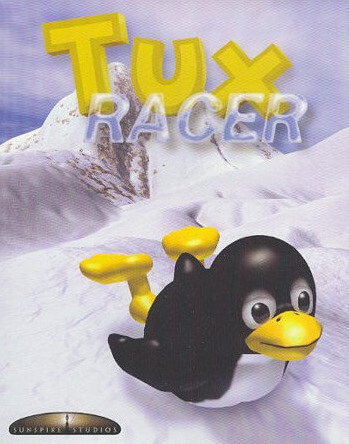 Tux Racer is a 2000 open-source winter sports racing video game starring the Linux mascot, Tux the penguin. It was originally developed by Jasmin Patry as a computer graphics project in a Canadian university. Patry and later the newly founded Sunspire Studios, composed of several former students of the university, would soon expand it. In the game, the player controls Tux as he slides down a course of snow and ice collecting herring.

Tux Racer was officially downloaded over one million times as of 2001. It also was well received, often being acclaimed for the graphics, fast-paced gameplay, and replayability, and was a fan favorite among Linux users and the free software community. The game's popularity secured the development of a commercialized release that included enhanced graphics and multiplayer, and it also became the first GPL-licensed game to receive an arcade adaption. It is the only product that Sunspire Studios developed and released, after which the company liquidated. The free game's source code has led to it receiving forks, made by fans continuing its development.

ux Racer is a racing game in which the player must control Tux across a mountainside. Tux can turn left, right, brake, jump, and paddle, and flap his wings. If the player presses the brakes and turn buttons, Tux will perform a tight turn. Pressing the paddling buttons on the ground gives Tux some additional speed. The paddling stops giving speed and in turn slows Tux down when the speedometer turns yellow. Tux can slide off slopes or charge his jumps to temporarily launch into midair, during which he can flap his flippers to fly farther and adjust his direction left or right. The player can also reset the penguin should he be stuck in any part of the course.

Courses are composed of various terrain types that affect Tux's performance. Sliding on ice allows speeding at the expense of traction, and snow allows for more maneuverability. However, rocky patches slow him down,:193 as does crashing into trees. The player gains points by collecting herrings scattered along the courses, and the faster the player finishes the course, the higher the score. Players can select cups, where progression is by completing a series of courses in order by satisfying up to three requirements: collecting sufficient herring, finishing the course below a specified time, and scoring enough points. Failing to meet all the criteria or aborting the race costs a life, and should the player lose all four lives, they must reenter the cup and start over. During level selection, the player can choose daytime settings and weather conditions such as wind and fog that affect the gameplay. Maps are composed of three separately saved raster layers that each determine a map's elevation, terrain layout, and object placement.

The commercial version of Tux Racer introduces new content. Besides Tux, players can select one of three other characters to race as: Samuel the seal, Boris the polar bear, and Neva the penguin.:6 Some courses contain jump and speed pads as power-ups, and players can perform tricks in midair to receive points.:4 They can participate in cups in one of the two events serving as game modes: the traditional "Solo Challenge" or the new "Race vs Opponents", where a computer opponent is added and must be defeated in order for the player to advance.:7 Courses are unlocked for completing unfinished cups. In non-campaign sessions, besides practicing,:9 players can also race in the two-player "Head to Head" local multiplayer mode, viewed on a split-screen.:10

Tux Racer was a hit, with the latest version seeing over one million downloads as of October 2001 since its release in January, according to Sunspire Studios. It was a personal fan favorite among Linux users, who often ranked it as the best or one of the best free games. In August 2000, Lee Anderson of LinuxWorld.com commended the game's graphics, speed, and the easiness of the ability to create tracks. In 2001, TuxRadar said the game provided a "shining light" of what free applications could achieve. In its 2001 preview, the Brazilian magazine SuperGamePower considered the game's graphics to be the best aspect and described the sound as not innovative, but good. Also in 2001, MacAddict compared the game's fast-paced style to podracing in Star Wars and summed up the Macintosh port as "more fun than words can describe."

The commercial version of Tux Racer attracted little attention. Andon Loginov of Igromania described it as a "pure arcade game" featuring nothing but four selectable characters and a set of courses with fish scattered about. He described the gameplay as calm and addictive and the music as relaxing, and praised the character models and track layout, with his only criticism being the system requirements.  Seiji Nakamura of the Japanese website Game Watch described it as cute and humorous and praised the game's graphics and shadow and reflection effects, but found the game to lack appeal for adults.

Even after its production's cessation, Tux Racer has continued to be generally well-received, largely concerning its forks. Linux Journal gave it an Editors' Choice Award in the "Game or Entertainment Software" category in 2005. Digit applauded the graphics and replayability, as well as the speed of the game and the abundance of courses, but found the music to be monotonous. Daniel Voicu of Softpedia praised the Extreme Tux Racer fork for being relaxing and funny and having the ability to reset Tux, as well as noted the game's fast pace, but criticized its perceived lack of interactivity and having Tux look like a "plastic puppet." Linux For You also called the fork entertaining, but also criticized its bugs and the "plastic" look of Tux.