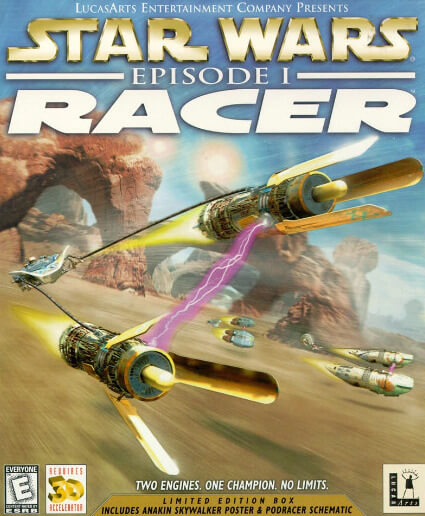 
Star Wars Episode I: Racer is a racing video game based on the podracing sequence featured in Star Wars: Episode I – The Phantom Menace. The game features all of the racers and race course on Tatooine featured in The Phantom Menace. It also adds several new courses, some on Tatooine, others on various planets. Several single player modes, including a tournament mode, are available for play. It also features multiplayer, the format of which varies by platform. Jake Lloyd and Lewis MacLeod, who portrayed Anakin Skywalker and Sebulba in The Phantom Menace, reprise their roles in the game.

Episode I: Racer received generally positive reviews from critics. Several major media outlets listed it as one of the top Star Wars video games. As of 2011, the game holds the Guinness record as the best-selling sci-fi racing game, having worldwide sales of 3.12 million and beating other series like Wipeout and F-Zero. Two titles featuring podracing were released after Episode I: Racer's release. Star Wars: Racer Arcade, an arcade game featuring many similar tracks and characters, was released in 2000. A sequel, Star Wars Racer Revenge was released in 2002 for the PlayStation 2.

Star Wars Episode I: Racer features a variety of tracks spanning several different planets. It also includes all of the racers featured in the movie as well as additional competitors exclusive to the game. The player character's podracer is equipped with a boost function that the player can activate. While activated the podracer's temperature will rise, and if the player boosts for too long, the engines will explode, destroying the podracer and costing the player several seconds as he/she respawns to continue racing. The podracer will also be destroyed if one or both engines sustain severe damage from colliding into too many walls or obstacles, requiring the player to steer carefully to avoid falling behind. The player can also actively repair the podracer while competing, however doing so results in a slower overall speed until repairs are either complete or stopped.

Three single player game modes are available in the game. In Tournament mode, the player character competes in a championship. Completing races awards money, with higher ranked finishes resulting in higher payouts. This can be used to buy parts or repair droids, unlock new tracks, and unlock new racers. Free Race mode allows the player to practice any previously unlocked courses using any unlocked racer. The player character cannot earn money or unlock tracks and racers, but can set the difficulty of the opponents. Time Attack pits the player character against the clock, racing along to try to complete the fastest time on the given course. This mode is absent from the PC version. Instead the Free Play mode allows the player to set the number of computer opponents to 0.

Multiplayer is also offered on all platforms, though it differs between the PC and console versions. The Nintendo 64 and Sega Dreamcast versions feature a two player splitscreen mode, while the Windows and Macintosh versions allow for play over a Local Area Network (LAN). This Windows version uses the deprecated IPX protocol to accomplish this, while the Macintosh version uses the TCP/IP stack. The multiplayer mode can support up to 8 players.

The game was met with positive to average reception. GameRankings gave it a score of 75.78% for the Nintendo 64 version; 75.42% for the Dreamcast version; 73.79% for the PC version; and 69.44% for the Game Boy Color version. It has been featured on several lists of the best Star Wars video games. In March 2004, GMR rated Episode I: Racer the fifth best Star Wars game of all time. In 2015 PC Gamer listed it 3rd in their list of top Star Wars games. That same year it placed 10th in Rock, Paper, Shotgun's top Star Wars games list. In Game Informer's 2016 list of the 30 best Star Wars video games Racer ranked 11th. WatchMojo.com ranked the game as an honerable mention in one their Top 10 Star Wars Video Games list. As of 2011, the game holds the Guinness record for the best-selling sci-fi racing game having worldwide sales of 3.12 million beating other series like Wipeout and F-Zero.

Next Generation reviewed the Nintendo 64 version of the game, rating it three stars out of five, and stated that "Yes, it's fast, it's largely customizable, features a lot of options, and it's fun, but it's tough to shake the feeling that if it weren't for the Star Wars license, it wouldn't otherwise stand out."

The editors of Computer Gaming World nominated Racer for their 1999 "Racing Game of the Year" award, which ultimately went to Need for Speed: High Stakes.