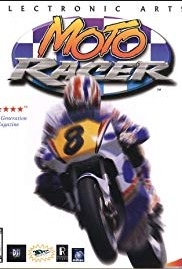 Moto Racer is an arcade style motorcycle racing game developed by Delphine Software International and published by Electronic Arts for Microsoft Windows and PlayStation. The game was originally to be published by BMG Interactive, but after BMG closed down its U.S. operations it sold the publication rights to Electronic Arts.

Players race on either a motocross bike or street bike, depending on the track. Moto Racer features a total of eight tracks, four of which are unlockable. A multiplayer option is also available, allowing two players to compete over a LAN or Internet on the PC or split screen on the PlayStation version. The single player modes include "Time Attack" and "Championship". The most laps a player can do is eight on the Practice Race.

Next Generation reviewed the PC version of the game, rating it five stars out of five, and stated that "Moto Racer GP fills the vacant niche of the PC motorcycle racing genre admirably."

Next Generation reviewed the PlayStation version of the game, rating it five stars out of five, and stated that "Although perhaps not quite as technically proficient as the PC version, Moto Racer for PlayStation loses nothing in the essence of the gaming experience it offers. A remarkable achievement."