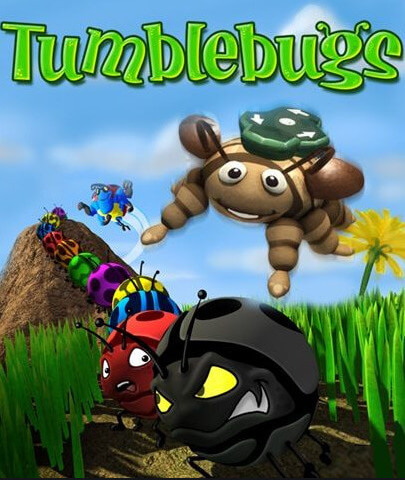 Tumblebugs is a fast-paced puzzle game developed by Wildfire Studios. It was released for a number of platforms, including Windows, Mac OS X, iOS and WiiWare.

An updated version for Windows, Tumblebugs Remastered was released for sale in April 2018.

The objective is to save all of the bugs rolling round the screen, before they reach the opening to the Black Bug Empire's underground lair. When one bug reaches the opening, the player loses a life and the other bugs in the line quickly rush underground. The player can save the bugs by firing a coloured bug from Tumble's back towards a group of two or more of the same coloured balls. When three or more of the same colour come in contact with each other, they are set free, possibly triggering other bugs to escape as part of a chain reaction.

Occasionally, Powerup indicators will appear on bugs in the queue. If you complete the group while the Powerup is active, you'll collect that Powerup. If you don't collect it, the Powerup will flash quickly, and eventually disappear.

Tumblebugs has a choice of Story Mode or Time Trial Mode.

In Story Mode there are four backyards where the Black Bugs have taken control, and a total of 12 levels. The level selection screen shows all of the levels you've unlocked so far. Each round is numbered to show where you are up to. For example, if you're on 3-2, this is the second round on level 3.

Time Trial Mode is a test to see how long you can last on your favourite map, while the difficulty is gradually increased. You can choose from all of the maps you've already unlocked in Story Mode - as you progress through Story Mode new maps will unlock in Time Trial Mode.

Rewind: The Tumblebugs are briefly able to push back against their captors and move away from the lair.

Fast Forward: Bugs move more quickly toward the lair, but 500 points is scored which can help a great deal with reaching 100% complete. This powerup did not appear in Tumblebugs 2.

Ballistic Bugs: For a limited time, you can launch bugs right over the top of the queue to reach the bugs at the rear which were impossible to get to before.

Wild Bugs: These multi-colored bugs match with any color they touch, even two at once!

Star Bug: Can bust through several lines of bugs, freeing each one it comes into contact with. Very useful for collecting other powerups!

Blossom Bug: Bugs are freed all at once in a circle around the powerup.

Color Burst: In a circle surrounding the powerup, bugs are all changed to the same color.

E-X-T-R-A Letters: Collect all of the letters to spell out the word EXTRA to be awarded an extra life.