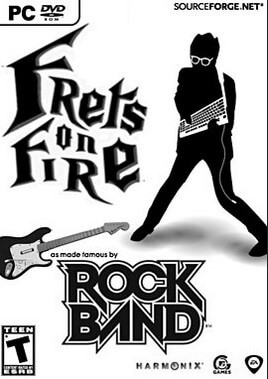 
Frets on Fire (FoF) is a free, open-source Finnish music video game created by Unreal Voodoo. Players use the keyboard to play along with markers which appear on screen, with the aim to score points, achieve a high point multiplier, and complete a song. Frets on Fire was the winner of the Assembly 2006 game development competition.

The game is written in the Python programming language, and is licensed under the GNU General Public License, although the game incorporates other free and open-source code under other licenses. The game's included song files and some internal fonts are proprietary, and their redistribution is not permitted outside of the Frets On Fire executable.

As there has not been an updated stable release of the original Frets on Fire since 2010, many former users have begun using Phase Shift, as it supports the use of song files originally created for Frets on Fire and offers more current support.citation needed Clone Hero had also released in 2017, and grew a large fanbase.citation needed

Frets on Fire is a music playing video game. It is playable on Microsoft Windows, Mac OS X, and Linux. The player presses buttons in time to coloured markers, which appear on-screen, the markers are matched with the rhythm of the music. Frets on Fire can be played by using a keyboard by pressing the fret buttons and pick buttons, although there is support for joysticks, meaning that with the appropriate adapter and/or software, various guitar-type controllers can be used as well.

Coloured square-shaped markers appear on the player's screen, synchronized with the song and are played by holding the fret buttons that correspond with the correct colour and pressing one of the pick button at the correct moment. Every ten correct hits increase the score multiplier, which multiplies the points for every hit by up to four times. The multiplier is reset when the player misses a note or strums at the wrong time.

Frets on Fire includes a built-in song editor (or "fretting" tool) that allows editing and creation of songs. This allows users to customise their own tracks. Other programs include EOF (EditorOnFire), dB (Feedback), and Freetar editors. MIDI sequences created in programs such as FL Studio and REAPER can also be used. The Frets on Fire Wiki has an extensive resource of custom song frets. There are also many other sites that have been created to provide songs and other resources for the game. Frets on Fire also allows users to import songs from other guitar games. These include Guitar Hero, Guitar Hero II and Guitar Hero Encore: Rocks the 80s. The game also features a tutorial, which lets users unfamiliar with the gameplay get accustomed to the game. While the game contains a keyboard play mode, USB Joysticks can also be used. This allows regular joysticks and guitar controllers to be controllers for the game as well, helping to replicate the same feel that commercial guitar games provide.

Since version 1.2.438, the game features hammer-on and pull-off notes, commonly abbreviated to HOPO, although the game refers to them as "tappable notes". These notes allows the player to press only its fret button to play if the previous note was played correctly, emulating the feature of the Guitar Hero series. Bugs were found in the new gameplay element, and version 1.2.451 fixed them; this version also added an option to disable HOPO notes. Frets On Fire lacks the ability to allow players to use the whammy bar, while FoFiX has basic support for modulating the pitch of a track. This is referred to as either "Killswitch" or "Pitchbend." This was added in the 3.100 update for FoFiX.

Much like console guitar-style games, Frets on Fire comes with World Charts, an official online high score list. However, since the entire system is open source, players have the ability to host their own server as well.