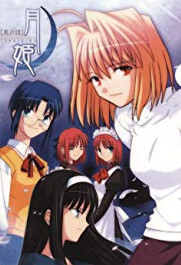 Tsukihime (Japanese: 月姫, lit. "Lunar Princess") is a Japanese adult dōjin visual novel created by Type-Moon, who first released it at the Winter Comiket in December 2000. A remake to the visual novel is also currently being planned. It has been adapted in 2003 into an anime television series, Shingetsutan Tsukihime, animated by J.C.Staff, and a manga series, which was serialized between 2003 and 2010 in MediaWorks' seinen magazine Dengeki Daioh, with 10 volumes released.

Its fame and renown is often attributed to its comprehensive and expansive storyline and its writer Kinoko Nasu's unique style of storytelling. As well as its anime and manga adaptations, it has also spawned numerous merchandising and memorabilia franchises.

Tsukihime's gameplay requires little interaction from the player as most of the game's duration is spent on reading the text that appears, representing either dialogue between the characters or the inner thoughts of the protagonist. The player is presented with choices, some affect the story in large ways, others do not affect the story at all or affect it in small ways. Changes that affect Shiki's opinion on the characters and heroines usually change the direction of the story drastically.

Some options can lead to (often violent) deaths for Shiki, after which the player can optionally view a comedic section called 'Teach me, Ciel Sensei!',where Ciel educates the player on their decisions and offers hints on how to avoid them on the next playthrough.

There are two scenarios: the Near-Side Route (as in "near-moon") which includes Arcueid and Ciel as selectable heroines, and the Far Side Route (as in far-moon) which includes Akiha, Hisui, and Kohaku as selectable heroines. Every heroine except Kohaku has two possible endings. When the player has achieved all possible endings, a new section is unlocked, entitled Eclipse. Eclipse is an ending to all routes, and an epilogue of sorts.

Tsukihime's plot follows the perspective of Shiki Tohno (遠野 志貴, Tōno Shiki), a second year high school student of Misaki Town, who suffered a life-threatening injury when he was young. When he regained consciousness, Shiki was able to see "death lines", lines by which things will eventually break when they die. This includes the death of inanimate objects as well as living beings and undead beings. Because of his Mystic Eyes of Death Perception making him see death lines Shiki has immense headaches as his mind cannot cope with the sight of death. Soon after he is given a pair of glasses from Aoko Aozaki that blocks the sight of these lines. The game then advances to Shiki's second year of high school. After his injury, he was banished to a branch family of the Tohno household. After eight years he is called back home by his younger sister, Akiha Tohno (遠野 秋葉, Tōno Akiha), when she assumed the responsibility as the family's head. After moving back Shiki has trouble adjusting to the old-fashioned lifestyle his sister lives by.

As the story progresses the plot diverges depending upon the choices the character makes. Shiki must use his powers to confront supernatural beings such as vampires, that are known as True Ancestor (真祖, Shinso) and Dead Apostles (死徒, Shito). The two plot routes that follow Shiki with Arcueid or Ciel are the Near Side of The Moon routes while the three routes that follow Shiki with Akiha, Hisui or Kohaku are the Far Side of The Moon routes.

In both of the Near Side of The Moon routes, Shiki discovers a beautiful woman named Arceuid passing by and, in a fit of madness and lust, murders her. However, she reveals herself as an immortal vampire and promises to spare Shiki if he acted as her shield in her quest to kill a vampire. Shiki and Arcueid together defeat a vampire named Nrvnqsr Chaos.

From here, in the Arcueid route, Shiki kills the soul of Michael Roa Valdamjong, Arceuid's true objective. He discovers that Akiha is not his real sister and that his past as the former heir of Tohno family was made up by his "father", Makihisa Tohno via hypnotism, whose powers the Tohno family had due to a weak demonic lineage. Shiki was adopted in the Tohno family when he was little because he had the same name as the real family heir SHIKI Tohno. However, when SHIKI and Shiki were nine years old, SHIKI murders Shiki in a fit of madness. Makihisa kills SHIKI, thinking that the demonic blood had made him insane, but could not finish the job as he was still his child.

In reality, the vampire named Michael Roa Valdamjong had chosen SHIKI as his host body for his new reincarnation and started to emerge after his sixteenth birthday, which was the real reason that drove him mad. In order to maintain the family name, Makihisa informs the world that the adopted child had died in a car accident, which also left the real heir incapacitated. With this declaration, Makihisa switches the lives of Shiki and SHIKI. However, he still could not have Shiki with him, and had him sent to the Arima family, from where he returned 8 years later, at the beginning of the game. It is revealed that Arcueid is a royalty amongst vampires. She was created by the True Ancestors as a weapon and had never experienced joy and life as a normal person until she met Shiki. Shiki and Arcueid fall in love and depending on the ending, are united together or are separated.