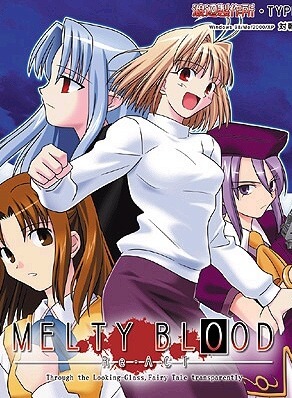 The original Melty Blood was announced on October 8, 2001 at Tsukihime Matsuri Himehajime (月姫祀〜秘初〜), the dōjin convention hosting only Tsukihime content. The plan was suggested by Nobuya Narita of Watanabe Seisakujo (French-Bread, from 2003). Kinoko Nasu wrote scenarios and Takashi Takeuchi designed characters. Watanabe Seisakujo developed the game system and pixel arts. They were known as the creator of parody games, but Nasu requested not to break the style of Tsukihime. They had difficulty thinking of attacks because original characters didn't have an attractive skill suited for the fighting game. They also worked hard to create frames of animation exceeding Street Fighter III.

An expansion to the original game, featuring an 'Arcade Mode' whose storyline takes place after the original Melty Blood. The expansion made numerous changes in regards to character balance and to remove many infinite-combo sequences. New movesets were created for the doppelgänger characters, whereas in the original, most of these characters had nearly identical movesets to their counterparts. It also made changes to the game's mechanics and added several new characters, though only two are playable the other four NPCs: Ren, Satsuki Yumizuka, Neko-Arc (non-playable character) Executioner Ciel (Ciel holding the Seventh Holy Scripture, non-playable character), White Ren (Sub Boss) and Aoko Aozaki (non-playable boss).

The final update to Re-ACT, Final Tuned, adds several features designed to allow the game to be configured to resemble the gameplay of Melty Blood: Act Cadenza. It also adds a large number of gameplay tweaks and slightly updated animations, such as the inclusion of a new, analog-friendly controller setup; new configuration options that lets players assign multi-button commands to individual buttons; the ability to alter and adjust many of the game's internal variables (via new interface options); and four new colors for each player.