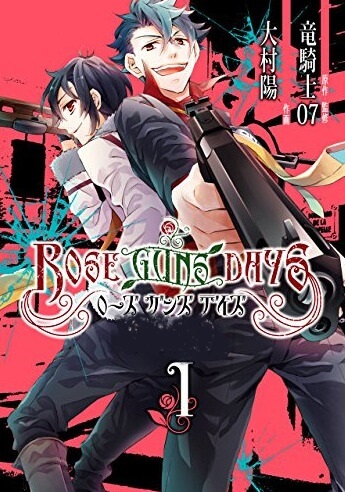 Rose Guns Days (ローズガンズデイズ Rōzu Ganzu Deizu) is a four-part Japanese dōjin visual novel series produced by 07th Expansion and playable on Windows PCs. The first game in the series, Season 1, was released on August 11, 2012, and the fourth game, Last Season, was released on December 31, 2013. There have been six manga adaptations based on Rose Guns Days published by Kodansha and Square Enix.

As a visual novel, the gameplay in Rose Guns Days is spent on reading the story's narrative and dialogue. The text is accompanied by character sprites over background art made from altering real-world photographs. Throughout gameplay, the player encounters a quick time event minigame of a fist fight battle sequence that resembles a fighting game. The outcome of these minigames does not influence the progression of the story, and the player even has the option to skip them. The minigame has two parts: attack and defense. After the player successfully attacks three times, the player can then perform an overkill attack whose power is determined by the choice of one of six cards. How well the player performs in the minigames determines the total score and emblems awarded, and as the score increases, so does the player's rank, which increases the difficulty of the minigames.

A spin-off manga, titled Rose Guns Days Aishū no Cross Knife (Rose Guns Days 哀愁のクロスナイフ) and illustrated by Yūji Takagi, was serialized in Big Gangan between December 25, 2012 and October 25, 2013. Two volumes for Aishū no Cross Knife were released between August 22 and December 21, 2013. A prologue manga, titled Rose Guns Days Fukushū wa Ōgon no Kaori (Rose Guns Days 復讐は黄金の香り) and illustrated by Mei Renjōji, was serialized between the June 2013 and June 2014 issues of Kodansha's Monthly Shōnen Sirius magazine. The first volume of Fukushū wa Ōgon no Kaori was released on November 8, 2013 and the second and last on July 9, 2014.