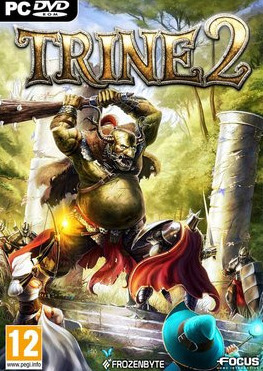 Trine 2 is a side-scrolling, platform and puzzle video game developed by Frozenbyte. It is the sequel to Trine and was released on Microsoft Windows, OS X, PlayStation 3, and Xbox 360 in December 2011, and later for Linux in March 2012. Trine 2 allows three players to play the iconic roles of a wizard, a thief, and a knight in a simultaneous cooperative mode. A Director's Cut edition was released via the Wii U's eShop on the console's launch day in all regions except Australia and Japan. The game was also released as a launch title for the PlayStation 4 in North America and Europe in 2013. On February 13, 2019, it was announced that a port to the Nintendo Switch would be released on February 18, 2019.

Trine 2 is a puzzle platform video game, requiring the player to use the skills of the three characters, Amadeus the wizard, Zoya the thief, and Pontius the knight, to navigate each game level. As with the first game, the mystical "Trine" has bound the three characters together into one common entity, and thus the player controls only one character which can be switched to the other two at any time. Each of the characters has unique abilities: Amadeus can use magic to grab onto certain objects in the game world, and create boxes and planks to be used to get around; Zoya can strike at objects with her arrows, and grapple onto certain surfaces; and Pontius is strong in combat against foes, can bash apart walls, and deflect projectiles with his shield. A combination of these elements is necessary to complete each stage in the game's world.

Characters have individual life meters, and if one character's meter depletes, that character cannot be used until the next checkpoint is reached. If all three characters lose their life meter, the player must start back at the last checkpoint. Throughout the game world are special magical vials, and for every fifty of these collected, the player receives a skill point, which can be used to gain abilities through a skill tree for each character. These skill points can be used collectively for each of the three characters, and can be traded between them.

Trine 2 also supports up to three players in a cooperative mode. In this mode, each player controls one of the three characters, but all must be unique; three players will be forced to play as Amadeus, Zoya, and Pontius. Two players can switch characters as long as both agree to the swap. If a character dies, the other players can revive the character at the next checkpoint. The skill tree is shared among all characters, based on the hosting player's saved game.

Story elements are incorporated into the game through the use of an all knowing narrator (voiced by Terry Wilton) as well as in-game scripted sequences. Scattered throughout the levels are also letters, poems, and documents which further flesh out the backstory and provide additional insight into the game's characters.

Trine 2 takes places some years after the restoration of the kingdom of the previous game and opens with Amadeus (voiced by Kevin Howarth) sleeping after a long night trying to once again learn the elusive fireball spell. A strange light shines upon him, and beckons him to follow. Although somewhat perturbed, the wizard's curiosity overcomes his fear as he pursues the unearthly glow, which eventually reveals itself to be the Trine. Upon his arrival Pontius (voiced by Brian Bowles) appears, the Trine having already summoned him after he protected peasant farms from magically overgrown vines, and informs Amadeus that they are needed once more. The wizard is less than thrilled, not wanting to leave his wife and kids, but the knight eventually persuades Amadeus that he must come. They then reunite with Zoya (voiced by Vicky Krueger) and the Trine starts them on their adventure, taking them to a mysterious wilderness of which they had never heard of or seen before.

The three heroes are immediately thrown into action after being attacked by bands of goblins. Along the way they encounter, of all things, a talking flower, which tasks them with finding her sister at the other side of the forest. The three heroes slowly discover the path out, while a mysterious figure (mentioned by the goblins simply as "The Witch") is overlooking their progress. The trio then enter an eerie tree house, which Amadeus believes to be the home of a witch. After bypassing several traps meant to keep out the goblins, they finally meet the mysterious person who has been watching them all this time. She reveals herself as the crown princess Rosabel (voiced by Charlotte Moore), and asks the heroes to help her rid the kingdom of all the evil that has befallen it, to which the three agree readily. This includes going to her once glamorous castle which has been taken over by the goblins, where the Goblin King now resides. After the three find and slay the great goblin, Zoya convinces the others to take a look around for treasure.

Through a series of book entries, looted poems, and narrative scattered around the levels, a story of two sisters, Rosabel and Isabel (voiced by Alix Wilton Regan), unfolds. They begin with the sisters at the ages of eight and nine, with both of them initially being quite close. The two were talented at magic, but as the stories progress into their later years it becomes clear that it was Isabel that got the most attention, received nicer gifts, and was eventually chosen as Queen. Rosabel, looking on as her sister got the attention and ever increasing status, becomes increasingly jealous and a tad vengeful. On her birthday, Isabel is invited to a 'surprise party' by her sister. Taken to a secret hiding place where they used to play as small children, she is imprisoned by Rosabel and is held captive by an enchanted tree under an irreversible sleep spell. The forest however, starts to rob Isabel of her magical powers, causing all plant and animal life to overgrow. This put the kingdom under unbalance, allowing the goblins to conquer it. After observing the heroes and the Trine, Rosabel wishes to use the powers of the artifact to save Isabel and restore the kingdom.

The heroic trio eventually come to realize that Isabel is being held hostage, and decide to confront Rosabel. After unsuccessfully trying to get the heroes to hand over the Trine, she imprisons them in the goblins dungeons. They quickly make their escape and, along the way, overhear goblins talk that the forest's growth has reached their homeland and that the monsters plan to attack. With Isabel using her powers to allow the forest to help them travel, they soon return to Rosabel's tree house. Rosabel summons her pet dragon to take care of the three heroes and steal the Trine, but they manage to defeat the creature and Rosabel, who falls into a lake. This awakens Isabel who quickly dives in to save her sister despite all she had been put through. She reappears with Rosabel's body, but whether she survived is unclear. Isabel then thanks the heroes for their service and the Trine appears to help everyone one last time. Amadeus, Pontius, and Zoya are then teleported back to the forest where their adventure began. The game ends with them sitting by a campfire sharing stories of their grand adventure before finally travelling back to their homes for the night. Isabel and Rosabel's fate are left open, though it is explained that without Isabel's magic, the forest and her kingdom will eventually recover and that the heroes' own homeland is now once again safe.