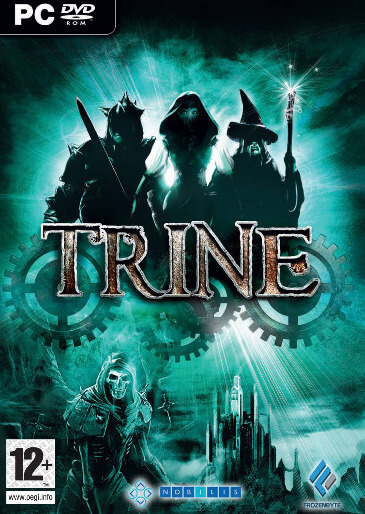 Trine is a side-scrolling, action platform-puzzle video game developed by Frozenbyte and published by Nobilis. The game was originally released for Microsoft Windows in 2009, and has since been ported to Linux, OS X, and the PlayStation Network. The game takes place in a medieval fantasy setting and allows players to take control of three separate characters who can battle enemies and solve environmental puzzles.

The player controls and switches between three different characters (a thief, a knight, and a wizard) to try to complete levels. There is also a cooperative play feature, whereby multiple players can join in at any time to control different characters simultaneously. Each character has their own health and energy meter. Energy is used for certain weapons and abilities, and is replenished by blue-colored bottles found throughout levels. Health is replenished by collecting heart-shaped containers, which result from destroying certain enemies.

The player also has a single experience rating that is shared among all characters, and is incremented by acquiring green-colored bottles found throughout levels. Every 50 experience points, each character is given one point towards the purchase of upgrades to their abilities. Treasure chests are also spread throughout levels, each containing a charm that offers the bearing character new or upgraded abilities. The player can transfer these objects between characters, though some will only have an effect on certain characters.

Checkpoints are spread throughout levels, in the form of silver orbs on pedestals. Upon crossing a checkpoint, any deceased characters are brought back to life, and any characters below a certain amount of health and energy are replenished up to that amount. The amount of energy and health replenished is dependent upon the difficulty setting chosen by the player. When a character dies, the player must choose another living character to continue playing the level. If all three characters die, the player is sent back to the last checkpoint crossed, and all three characters are resurrected.

Enemies primarily include walking skeletons, spiders, and bats, along with boss characters, like giant skeletons and other large creatures. Some skeletons are armed with swords, others with bows and arrows, some spit fire, and some have shields. Skeletons are capable of scaling walls. Other dangers include lava, fireballs, giant sharp pendulums, and various other booby traps.

Zoya the Thief, the first of the three heroes introduced in the game, is voiced by Vicky Krueger. The Thief's weapon is her bow and arrow. The bow can be “charged” by holding down the fire button before releasing, and longer charges make for farther, straighter shots. The Thief also has a grappling hook which can be fired at wooden surfaces. Regular arrows and the grappling hook are unlimited, and do not diminish the Thief's energy. At some point during the game, the Thief can acquire the ability to shoot flaming arrows, which do diminish her energy. Flaming arrows inflict more damage on enemies, can break certain objects, and can light torches found in certain dark areas of the game. The Thief's possible upgrades include shooting more arrows with each shot, faster charging of the bow, and more damage inflicted with the flaming arrow. She is the quietest of the three heroes, and takes a strong liking to the magical forest ruins presented towards the end of the game.

Conjured objects are primarily used to help overcome obstacles and reach difficult areas. The plank, for example, can be used to bridge gaps. All conjuring and remote moving drains the Wizard's energy. The Wizard has no traditional attacks, however he can crush certain enemies by hurling objects into them. He can also block attacks by conjuring or moving objects in their path. The Wizard's possible upgrades include the ability to conjure more than one box or plank into simultaneous existence (whereas initially only one of each could be on the screen at once), changing future conjured floating platforms into wood (so that the Thief can attach her grappling hook to it), and making the floating platform into an explosive that the Knight or thief can trigger. In the game, he is shown as being wise but also foolish, cowardly but determined, and imagines himself to be a bit of a ladies man.

Pontius the Knight's initial weapons are his sword and shield. He is voiced in the game by Brian Bowles, and is presented as a brave and loyal companion despite the fact he is not that bright, and has a strong love for food and drink. The player can at some point acquire a flaming sword during the game, which the Knight can use to inflict more damage as well as use to light torches; the player can also pick up a sledgehammer for Pontius. The Knight also has the ability to lift certain objects and hurl them, and his shield can be used to deflect enemy attacks, as well as falling objects and projectiles. The Knight's possible upgrades include additional sword damage, charging attacks, and additional sledgehammer attacks.