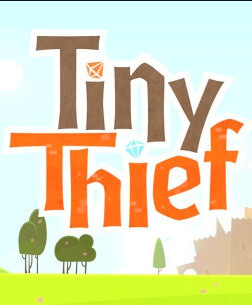 Tiny Thief was a point and click adventure game that was part of the publisher Rovio Entertainment's Rovio Stars program. It was set in a vaguely medieval period, although robots and lasers could be found.

The story of Tiny Thief followed a childlike Robin Hood, that stole from enemies such as the sheriff, pirates and bakers. The solving of puzzles normally required stealth, so players need to act cleverly.

Rovio discontinued development of Tiny Thief and removed it from app stores in February 2016.

In Tiny Thief, the goal was to steal a certain object placed in an area of the level. Players control a thief by tapping on an accessible area. Players could guide the thief into a ladder, door or anything other paths to access more areas. Players could also let the thief pick up objects to help with the mission. Some levels required stealth, so if a guard or a person saw the thief, the level would restart to a certain point. The game used the three-star rating format. The first star was earned by picking up hidden treasures, the second one was earned by stealing the key item, and the third one was awarded when the thief's pet ferret is found.

Tiny Thief received favorable reviews on the aggregate review website Metacritic the game attained an overall score of 86 out of 100 based on 21 reviews. It has been presented with the "Editor’s Choice" on the iOS App Store and won the People's Choice Award at the 10th annual International Mobile Gaming Awards.