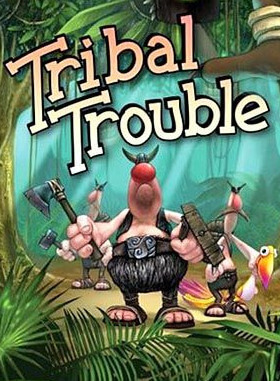 Tribal Trouble is a real-time strategy video game for PC. The game pits natives of tropical islands against invading Vikings. The game was originally developed by independent studio Oddlabs. The game was well received by the press and has won several awards. This game is recommended for ages 12 and up by the Oddie Recording studios.

The game was originally developed by independent studio Oddlabs and released in March 31, 2005. It was released for Microsoft Windows, Mac OS X, and Linux.

The game also spawned a sequel, Tribal Trouble 2 in 2011, however it doesn't seem to have got further than Beta testing.

In September 2014 the game's source code was released to the public on GitHub and is now open source under the GPLv2. Development continues in a community fork.

Although tiny of stature, the peons are the only real workforce of your tribe. With their patented Multi Tool they can cut down trees, mine rocks, construct, repair and demolish buildings, slaughter innocent-looking tropical chickens and produce a variety of weapons. In lack of a real armed force, peons can also attack enemy warriors, but don't expect them to survive that unless the enemy is greatly outnumbered.

Where the peons do all the hard work, the warriors get all the fun of hacking down the enemies and wrecking their buildings. Warriors generally come in three flavors: The basic rock warrior with his inferior stone weapon, the iron warrior with his sharp-edged iron weapon and finally the mighty chicken warrior who, despite what his name might imply, is the toughest of them all because of his tropical-chicken-enhanced weapon.

Only the most maniacal individuals of a tribe can be turned into chieftains, the game's true weapons of mass destruction. Using his mighty lur, the Viking chieftain can stun enemies with his lack of musical abilities, or simply create a shockwave that will leave neither units or buildings standing. His nemesis, the native chieftain, excels in his deadly cooking skills. From his bubbling cauldron, he can cook up poisonous fumes that will kill off most lifeforms equipped with a nose, or summon forth angry clouds that strike down enemy units and buildings with lightning.

The quarters are where you create new units. Every now and then a new peon will turn up, and the more peons you have stuffed in the quarters, the faster new ones will appear. Exactly how a population consisting of males only manage to procreate is something we would rather not discuss here.

These buildings serve as resource storage, weapons workshop and training barracks for your tribesmen. From here, resource harvesting operations are managed, peons are put to work in the smithy and new warriors are trained with the produced weapons.

Towers are great for defending your buildings and hard working peons. A few towers with warriors in them can stop an army of even slightly determined attackers.

These are the naturally occurring resources from which your tribesmen construct their buildings and weapons. If the amount of a resource goes below a certain level, more will automatically spawn. That's simply nature's way of encouraging the tribes to keep producing weapons and fighting wars.

The tropical chicken (Turpiculus Exoticus Pullus) can be found in small groups scattered around on the islands, where they spend most of their time clucking and running around in circles to demonstrate their (apparent lack of) intelligence. What's more important, it has been discovered that their beaks have magical powers that can give throwing weapons the ability to bounce off the victim and hit other hostile targets. The origin of the tropical chicken has not yet been established, although native legends suggest that they "just fell down from the trees" one particularly windy day.

Inside Mac Games reviewed the game.