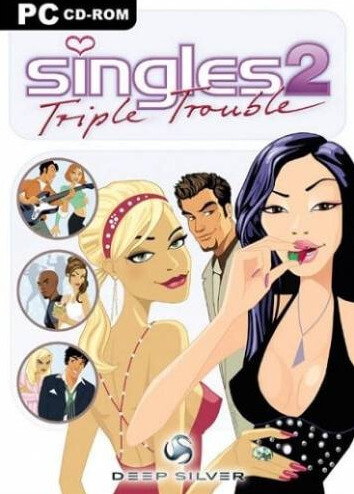 Singles 2: Triple Trouble is a video game developed by German studio Rotobee and published by Deep Silver in 2005. It is the sequel to the 2004 game Singles: Flirt Up Your Life.

The gameplay is similar to that of The Sims in that the player is responsible for characters who have to be taken care of, such as by ordering them to eat, sleep, go to work, etc.

Only three characters are ever in the same household. The aim of the game is to get two of them from being casual acquaintances through to having a sexual relationship. There are several characters of either sex with the possibility for a gay/lesbian relationships as well. Another add-on was the ability to visit a nightclub for meeting other singles.

It contains full frontal nudity, with the character's anatomical attributes drawn in high detail. The CD-ROM version sold in some countries censors any nudity throughout the game. The sexual content of the game is very explicit. In the beginning of a relationship, simple kisses are all the player can do. As the relationship increases, newer options are unlocked like Kiss in Bed (the couple get in a double bed and start kissing), Seduce with Rose (One partner seduces another with a rose), Fondle (One single will give the other single a hand job/fingering session), Sex between straight singles. Anal sex is performed by gay singles when the "receiver" lies on his stomach and has the other single's penis inserted into his buttocks from behind. Lesbian singles having sex looks similar to straight sex when the woman is on top but she "fingers" the girl as a penis replacement. Fellatio/Cunnilingus is performed by gay/lesbian singles in the whirlpool bath, but straight Singles have sex. Singles sleeping alone can access the option of self-service.