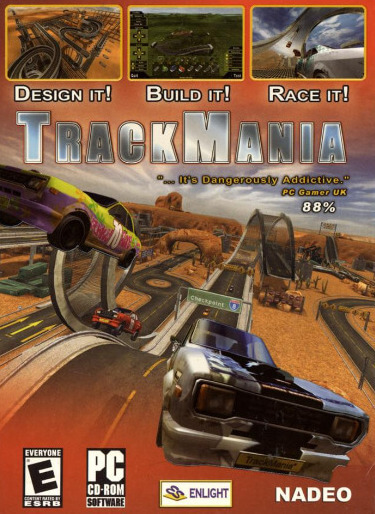 TrackMania is a series of racing games for the Microsoft Windows, Nintendo DS, Wii, PlayStation 4 and Xbox One platforms, developed by the French team Nadeo for the PC. Instead of following the usual trend of choosing a set car and track to play the game, in TrackMania the players can create their own tracks using a "building block" process similar to that of the 1984 game Excitebike, the 1985 game Racing Destruction Set and the 1990 game Stunts.

Unlike most other racing games, the TrackMania series lets the player race a track as many times as they want within a time limit. Players may choose to respawn at any time if they land upside down, leave the track or get off to a poor start. In multiplayer games, however, multiple cars race on the same track and cannot collide or otherwise influence each other.

TrackMania includes some pre-constructed tracks that players can race on to unlock "coppers", the in-game currency. These can be used to buy different building blocks, usually called "blocks", for their track, including regular roads, checkpoints, long bends, loop-the-loops, and jumps, which all snap to a grid automatically. Regular roads can be dragged to create straight sections as well as 90 degree corners. Most other blocks are automatically connected by placing them next to each other. There are three environments to choose from: Rally, Snow, and Desert, each of which offers a unique car. There are also three modes: Race, Puzzle, and Survival, each of which features an equal number of tracks for each environment. The "Survival" mode does not appear in the later games, though Platform bears some similarities.

The game features a network option, which allows players to compete via hotseat or a LAN, and over the Internet while players may upload their created tracks or skins to the game's website for use by other players.

A large number of tracks for both the original and sequel are available on the community-driven site TM Exchange website. Skins and 3D car models are also available from the community – TrackMania Carpark having the most car models.

Due to the success of the TrackMania series, Guinness World Records awarded the games six world records in the Guinness World Records: Gamer's Edition 2008. These include "Biggest Online Race", "Most Popular Online Racing Sim" and "Largest Content Base of Any Racing Game", with hundreds of thousands of user created tracks and hundreds of unique cars available for download.