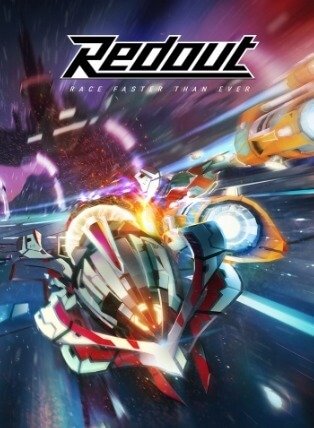 Redout is a futuristic racing video game developed and published by Italian studio 34BigThings, and co-published by Nicalis and 505 Games. It is inspired by racing games such as F-Zero, Wipeout, Rollcage, and POD as stated on the game page on Steam.

The game was released on Microsoft Windows on September 2, 2016, while PlayStation 4 and Xbox One got a late August, 2017 release. The Nintendo Switch port was originally slated for a Spring 2017 release, but got delayed and was re-announced for a May 14, 2019 release.

Redout is an anti-gravity racing game set in 2560 where players compete in the SRRL (Solar Redout Racing League) by piloting one of a selection of crafts on several different tracks.

There are seven racing teams and every team has four ships. Each ship has its distinct characteristics of acceleration, top speed, grip, structural integrity, energy pool and energy recharge speed. The players can customize their ship's characteristics installing upgrades and choosing a passive and active powerup of the six of each available.

There are five racing complexes (and an additional seven have been added via DLC) each one consisting of five tracks. Track design includes loops, jumps, teleports, underwater sections, tubular sections and tracks with low or no gravity.

The game features different racing modes of which the most unusual one is the boss mode, a race on a very long track obtained by linking via teleports the five tracks of a racing complex. Multiplayer is supported online via lobbies of up to twelve players and locally via two players split-screen.