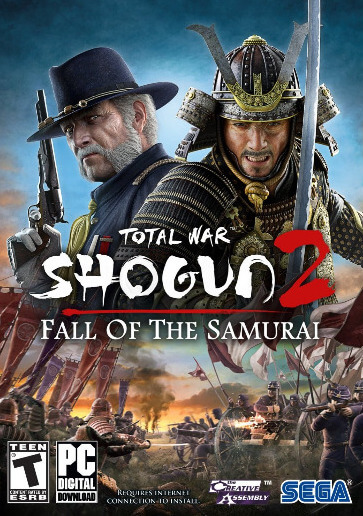 Total War: Shogun 2: Fall of the Samurai is a standalone expansion to the strategy video game Total War: Shogun 2, released on 23 March 2012. It is set during the mid 19th-century Bakumatsu era which also includes the Meiji Restoration, when the threat of Western powers forced Japan's government to modernize and eventually abolish its traditional samurai-based shogunate.

In August 2019, Creative Assembly announced that the game would be rebranded as Total War Saga: Fall of the Samurai.

This standalone expansion focuses on the conflicts between the Imperialists and the Shogunists in the final years of Tokugawa Shogunate, which takes place 300 years after the events of the original game. Gameplay is a mix of traditional Samurai culture mainly seen in the original game and the power of modern weaponry which is seen more in this version. The general objective for the player is to guide ancient Japan into the modern age, as the arrival of America, Britain and France will coincide with a civil war, which will seal the future of a nation.

Railways make an appearance in the game, allowing for much faster troop movement on the campaign map. The Gatling gun appears in the game. Artillery units and ships can now bombard enemy units directly on the campaign map. Likewise, coastal guns can now be built to counter such bombardment. Since ships in the expansion are now steam-powered, there are significant changes in naval warfare and tactics from previous games.

The player can choose to play on either the Imperial or the Shogunate side. Including all of the Fall of the Samurai DLC, there are five Imperial and five Shogunate clans to choose from. It is possible to convert a clan's allegiance from Shogunate to Imperial, or vice versa, in the early (but not the later) stages of the campaign.

Satsuma (Easy): The Shimazu of Satsuma domain are an imperial-supporting clan. They begin with two provinces and enjoy better relations with the Western Powers.

Choshu (Normal): Troops of Choshu domain enjoy a bonus on the charge.

Nagaoka (Normal): The clan of Nagaoka domain has administration experience and enjoys reduced costs in governance.

Jozai (Easy): The Jozai have the ability to replenish armies in enemy terrain as well as increased numbers of guerrilla units.