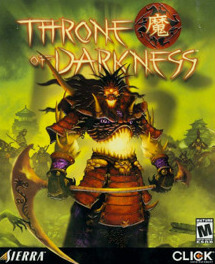 Throne of Darkness is a Japanese-themed action role-playing game released in 2001 by Sierra On-Line, a subsidiary of Vivendi Universal Interactive Publishing. Players control up to four (out of seven) different samurai at a time. The game has three separate multiplayer modes which support up to 35 players.

The game is set in Yamato, a medieval version of Japan ruled by the shogun Tsunayoshi and the daimyōs of the four clans. To become immortal, Tsunayoshi transforms himself into the demon Zanshin, the Dark Warlord, who unleashes his army of darkness to conquer Yamato. Zanshin's forces sweep across Yamato one night, catching the clans by surprise and annihilating them. However, believing that the four daimyōs were killed, Zanshin recalls his soldiers prematurely, leaving one daimyō and seven of his retainers alive. As dawn breaks, the daimyō decides to counterattack, ordering his seven surviving samurai to destroy Zanshin and his minions.

The four clans and daimyōs are named after historical Japanese clans and persons:

Gameplay resembles Diablo II, as many of the game's developers worked on Diablo.

The player chooses from seven different samurai: the Leader, the Archer, the Brick, the Ninja, the Wizard, the Swordsman, and the Berserker.

Throne of Darkness was a finalist for The Electric Playground's 2001 "Best RPG for PC" award, but lost the prize to Arcanum: Of Steamworks and Magick Obscura.