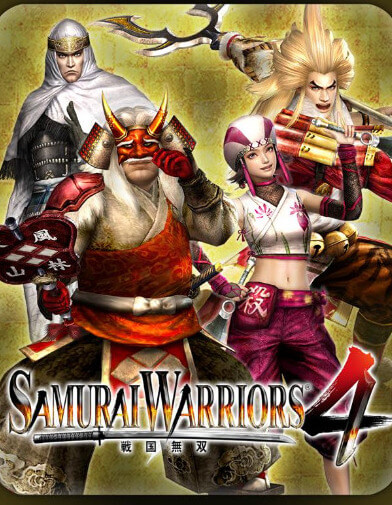 The game was made to celebrate the tenth anniversary of the series. While the game was confirmed to be in development for the PlayStation 3 as early as 2012, it was not until the SCEJA Press Conference in September 2013 that the game was officially announced, with a version for PlayStation Vita in addition to PlayStation 3, and was released on March 20, 2014, in Japan. The first promo of Samurai Warriors 4 was revealed on December 7, 2013. The PlayStation 4 version port followed on September 4, 2014. It was also released in North America on October 21, 2014, and Europe on October 24, 2014.

The game features a character-switching feature, similar to the spin-off, Samurai Warriors: Chronicles, with which players can take two characters into battles simultaneously, and freely switch between the two.

Two new moves, "Hyper Attacks" and "Rage Mode" are featured in this game:

Hyper Attacks is a secondary moveset available to all characters that allows the player to sweep through and clear out crowd of enemies with a dashing animation, although it is useless against enemy officers, as they will either deflect it or are otherwise immune against it.

Rage Mode renders the player invincible for a period of time, and also enhances the player's attacks as well as empowering their Musou attack by using the Spirit Gauge. Duels are featured, which occur when player-controlled characters meet with enemy officers under specific conditions.

The create-a-warrior mode is retained; it features much more expansive content, including the addition of two weapon movesets from the male and female protagonists from Samurai Warriors: Chronicles in addition to the three from previous games. Custom characters can also be played in the new "Chronicle Mode", where players can take requests for their custom generals.

Story Mode is also revamped; it no longer uses the traditional story-per-character format from previous games and instead feature ten stories based on clans and regions during the Sengoku period, akin to the kingdom-based story mode implemented in the recent Dynasty Warriors games.

Each stage offers a selection of playable characters for the player to use according to their participation in the battles; consequently, some characters do not appear in the story, although they still appear in the aforementioned Chronicle Mode. All of the stories lead to two separate stories: the "Unification", which mainly tells the conquest of Hideyoshi Toyotomi in uniting Japan as well as the conflicts between the Eastern and Western armies after Hideyoshi's death that leads to the Battle of Sekigahara and the extermination of the Toyotomi clan; and the "Sanada" story, which tells a parallel story with Unification but has a more personal insight with the Sanada clan.

Musou Attacks now have new finishing animations separate from their True Musou, but they no longer allow free-action for their durations. Enemy generals still use the older shockwave finishers, and are no longer fully invincible for their durations (they instead are granted Hyper Armor).

Like previous games in the series, the setting and story of Samurai Warriors 4 is centered on the Sengoku period of Japan, a period of much military conflict and political warfare where Japan was divided between regions ruled by daimyōs that lasted from the middle of the 16th century to the early 17th century. The events depicted, however, are romanticized, and may or may not be factual; for example, Nobuyuki Sanada and his brother, Yukimura Sanada, are shown to participate in the battle of Kawanakajima, even though both of them were not yet been born at that time. Many figures with little relevancy to the period, particularly the female figures who for the most part participated in only few of the battles, have larger roles; Koshōshō, notable for being Motochika Chōsokabe's wife in real life, becomes his primary rival in his conquest of Shikoku and is the representative of the Miyoshi clan in-game. Unlike the previous games there are no hypothetical routes, as a result the fates of the characters are played out as history stated.

The original features a total of 55 characters, more than previous games in the series. Virtually all characters from previous games return, including three characters (Goemon Ishikawa, Kojirō Sasaki, and Musashi Miyamoto) that were cut from the main series in Samurai Warriors 3 (in Samurai Warriors 2 for Goemon). Three characters: Munenori Yagyū, Naotora Ii, and Takatora Tōdō also make their debut in the main series here after having been introduced in the spin-off Sengoku Musou: Kuronikuru 2; they are counted as new characters in promotional materials.

In addition to returning characters, the game also introduces nine new characters, some of whom are former generic non-playable officers. Other than full playable characters, several generic officers can be made pseudo-playable by recruiting them as partners in Chronicle Mode.

The II update adds Naomasa Ii to the roster, bringing the character count to 56.