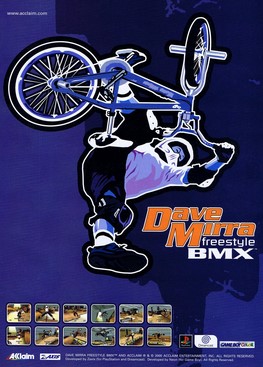 Dave Mirra Freestyle BMX is a video game released in 2000 featuring BMX rider Dave Mirra and other professional BMX riders. It was developed by Z-Axis and published by Acclaim Entertainment under their Acclaim Max Sports label. The game was released on the PlayStation, Game Boy Color, Dreamcast and Microsoft Windows. The player's main objective in the game is to choose one of the riders and work their way through a total of 12 different levels, completing objectives to unlock new equipment. A sequel was released in 2001 entitled Dave Mirra Freestyle BMX 2.

Following in the footsteps of the Tony Hawk's Pro Skater series, the player holds the assigned Jump button in preparation of performing a trick, and releases it to jump. When in the air, 'Big Air' tricks can be performed that can also be 'modified' with the aid of the modifier button, or the Big Air button again (modifiers themselves can also be modified). For example, the player jumps from a ramp, and performs a Superman (Big Air trick). The game also features ragdoll physics that are primarily for use in the 'Wipeout' multiplayer game mode.

There are a total of four game modes. The first six levels are all 'challenge-based'. The player must complete specific goals in order to advance to the next. The six, and final levels are 'competition-based' levels, where the player is judged on their performance in a number of timed runs.

Proquest is the main mode of the game, and could also be called 'Career mode'. The player chooses one of the riders and seeks to progress through all the levels of the game, in a series of two-minute runs. The first six levels are completed by finishing all the set challenges within them, and the competition levels can only be cleared when the player finishes a run worthy of winning the contest. Once the player finishes each successive level, they will receive new bikes (a total of four to buy) and clothing, and eventually upon completion of the game, videos of Dave Mirra and Ryan Nyquist and special cheat codes (depending on the character chosen).

Any unlocked levels can be played here. The player has the same timed runs as in the Proquest mode, but there are no goals to complete, judges to impress or new items to gain. The only real 'objective' of this mode is to improve upon the player's own high score.

A mode where the player can freely ride any level that has been unlocked in the Proquest mode. There is no time limit, so the real aim of the mode is to allow full and unrestricted exploration of the level to find the best spots to score and to practice performing tricks.