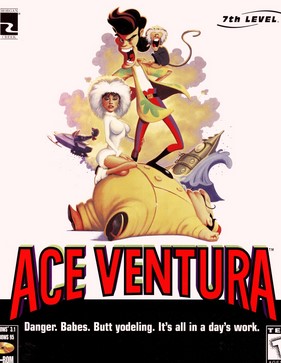 
Ace Ventura; The CD-Rom Game is an adventure game released for the PC on October 31, 1996, by 7th Level. The game is based on the animated series Ace Ventura: Pet Detective.

The game is a classic point and click adventure game that resembles the tone of the Leisure Suit Larry series by Sierra Games in it approaches the adult style of humor featured, which is implied but never shown. All while remaining faithful to the family-friendly tone that was established in the corresponding animated series that broadcasting at the time.

GameSpot gave the game 6.6 out of 10, while Gamezilla gave it 58 out of 100. Cindy Yans of Computer Games Magazine gave the game two and a half stars out of five.