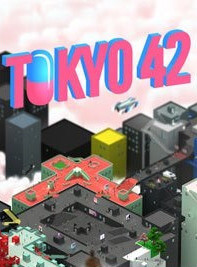 Tokyo 42 is an action video game developed by Smac Games and published by Mode 7, released on May 31, 2017, for Microsoft Windows and Xbox One platforms, and released on August 15, 2017 for PlayStation 4. The player takes the role of an assassin and uses attacks, dodges and stealth to pursue targets. The game is presented in a minimalist, low-poly, isometric perspective.

The gameplay experience of Tokyo 42 can be likened to that of a bullet hell game; The player must be aware of their surroundings as it is likely that enemy bullets will be coming in from multiple directions.

The player has a variety of weapons at their arsenal, from sniper rifles to grenades and even melee weapons such as katanas.

The camera angle can be rotated clockwise or counter clockwise by pressing "E" and "Q"' respectively.

The main premise of the story is that the player plays as an inhabitant of an ultra futuristic version of the Japanese city Tokyo who is framed for murder. The player escapes a police chase in the tutorial and is now officially a wanted criminal on the run. The player's friend tells the player of a good way to exact revenge on the assassin that framed you, which is to become an assassin yourself and rise the ranks to eventually be able to take them down.

Tokyo 42 received "mixed and average" reviews from critics, according to review aggregator Metacritic.