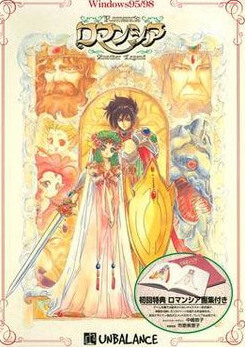 Romancia (ロマンシア), also known as Dragon Slayer Jr., is an action-adventure game developed by Nihon Falcom in 1986 for the PC-8801, PC-9801, MSX, and Sharp X1 computers. A later Famicom version was published by Tokyo Shoseki. An enhanced remake was released for Windows in 1999 by Unbalance. It is the third in the Dragon Slayer series, preceded by Xanadu and followed by Dragon Slayer IV. Romancia is a simpler and brightly colored game in comparison to the other Dragon Slayer titles, hence the name "Dragon Slayer Jr."

The game begins with Prince Fan Freddy (ファン・フレディ) outside the castle. As in Xanadu, Fan can speak with the king for some free equipment. The goal is to rescue Princess Selina (セリナ) within 30 minutes.

Movement is controlled with the arrow keys, and attacking is done with the action key. Unlike Xanadu, there are almost no statistics, and zero customization. The game consists largely of two screens with a few small sub-areas. The player has only thirty minutes to complete the game, further illustrating the light and accessible nature of the title versus the oppressive underground complexes of Xanadu. Despite this, the game is still rather unforgiving and the player will likely need to use trial and error or a walkthrough to solve some of the puzzles.