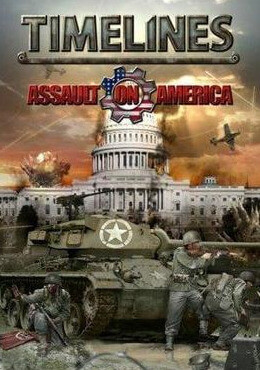 Timelines: Assault on America is a real-time strategy game set in an alternate history World War II, developed by Hungarian studio 4Flash Interactive. The game was being re-released for SteamOS in 2014. Released on iOS and Android on February 17, 2015.

On July 20, 1942, the United States’ Office of Strategic Services (OSS) takes advantage of information provided to them by the underground German Resistance against the Third Reich. The OSS launch Operation ‘Wolf’s Head’, where top marksmen hide among a rally given in honor of Adolf Hitler in Berlin, Germany, assassinating him there. The OSS also sabotages multiple planes carrying high ranking Nazi officials. Afterwards, control of the Third Reich is turned over to various Nazi generals. After multiple interrogations of German Resistance soldiers, the Nazis find out about Operation Wolf's Head. In response, they put aside their secret plans to invade the Soviet Union, and instead sign a non-aggression pact with them and conspire with the Empire of Japan to mount an amphibious two front invasion of the United States. After a successful German invasion of Cuba, as well heavy naval build-up in the Pacific by Japan, the Axis Powers begin their invasion of the U.S.

The game was built on the Horde3D graphics engine and GLFW on desktop platforms.