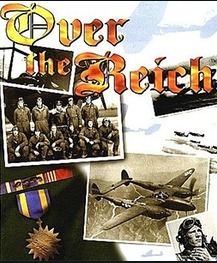 Over the Reich is a 1996 strategy computer game for personal computers operating the Microsoft Windows operating system. The game was released in North America and Europe.

Players can play as either Nazi Germany, the United States of America, or as Great Britain. This game combines turn-based dogfighting with strategic manoeuvers as the player must position his airplanes to destroy his enemies. Authentic clips from World War II help to improve the realism of this video game.

A mostly classical music soundtrack (with some wartime radio music) helps provide ambiance for the aerial settings. This game would eventually have a prequel called Achtung Spitfire! in 1997. Missions range from trying to liberate Nazi-occupied France by air power to attacking the German military power in the heart of Germany itself. The main menu resembles a vintage World War II hangar with difficulty levels ranging from Cadet (allowing new players to dive directly into the game) to Flight Commander (where incidentals like altitude, speed and attitude have to be manually controlled).

Over the Reich was a runner-up for Computer Gaming World's 1996 "Wargame of the Year" award, which ultimately went to Battleground: Shiloh. The editors wrote of Over the Reich, "Dogfights are fun, particularly over the Internet, but the real appeal of this game lies in the campaigns, where developing your individual pilots is almost a role-playing game in itself."

Over the Reich System Requirements

(0) Comments on "Over the Reich Full Version"